Baez, Cubs look to stay hot at home vs. A's 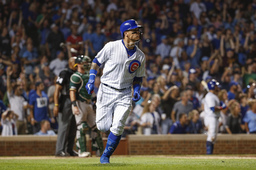 Five years ago, Javier Baez burst onto the scene for the Chicago Cubs in electrifying fashion, hitting a game-winning homer at Coors Field in the 12th inning of a highly anticipated major league debut.

Now he is a key contributor to a one-time World Series champion, and he's a two-time All-Star and one of the reasons for Chicago's ascension into first place of a close National League Central race even as a rash of injuries hurts the Cubs.

After hitting two homers Monday, Baez will attempt to help the Cubs keep the good times rolling at Wrigley Field when they continue a three-game interleague series with the Oakland Athletics on Tuesday night.

Monday marked the five-year anniversary of Baez's debut, and he celebrated the occasion with homers in consecutive at-bats. Baez hit a game-tying homer in the sixth and a two-run homer in the seventh that stood as the winning run when the Cubs held on for a 6-5 victory on a day in which they placed Craig Kimbrel (right knee inflammation) and Willson Contreras (right hamstring) on the injured list.

"Our depth is tested, no doubt," Cubs GM Jed Hoyer told reporters. "Not the best time for injury -- a couple of days into August, but that's the game. There's no sympathy anywhere, so we just have to figure it out."

By falling just short, the Athletics lost for only the second time in their last eight games and remained one-half game behind Tampa Bay for the American League's second wild-card spot.

Oakland is making another surge by going 28-13 since June 17 and 45-24 since mid-May. While Khris Davis recently went 29 games without a homer and Matt Chapman is 2-for-42 in his last 11 games, Semien is wielding a hot bat while playing every day.

In his last 23 games, Semien is batting .315 (28-for-89) with six homers and 25 runs scored. He upped his season total to 19 homers Monday and is eight shy of matching his total from last season.

"It's amazing where he's come from and where he is now," Oakland manager Bob Melvin recently told reporters. "I've never been around a big leaguer who's come this far."

A pair of left-handers will oppose each other when Brett Anderson starts for Oakland against Jon Lester.

Anderson has a pair of no-decisions and a 1.80 ERA in his two previous outings against Chicago.

Lester (9-7, 3.86) is attempting to reach double figures in wins for the seventh straight season. He last pitched Thursday in St. Louis when he allowed five runs on nine hits in five-plus innings of an 8-0 loss.