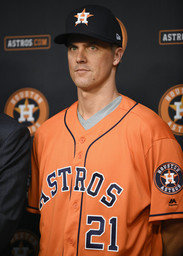 When right-hander Zack Greinke makes his Houston Astros debut on Tuesday, he will do so charged with maintaining the incredible momentum established by the team's rotation over the past two-plus weeks.

After right-hander Justin Verlander pitched the Astros to a three-game series sweep of the visiting Seattle Mariners on Sunday -- allowing one run on three hits and two walks with 10 strikeouts over six innings -- Houston starters ran their record to 14-1 with a 1.79 ERA over the last 17 games. Verlander, right-hander Gerrit Cole and left-hander Wade Miley have anchored the rotation during that span.

When the Astros open a two-game interleague series against the Colorado Rockies on Tuesday, the expectation is Greinke will take the baton and run with it.

"We have some really good names, but more importantly we have some really good guys that produce and go out there and set an excellent tone for us," Astros manager AJ Hinch said. "A couple of new guys -- (right-hander Aaron) Sanchez (Saturday) night, we'll see Greinke on Tuesday -- but that adds to that vibe and enjoyment of coming to the ballpark for me, the coaches, and the players and just feeling like we've got a chance from the very beginning."

The Astros acquired Greinke (10-4, 2.90 ERA) in a stunning deal before Wednesday's trade deadline, sending the Arizona Diamondbacks four prospects in return. His first game with Houston will come against a familiar foe.

Greinke is 13-7 with a 3.68 ERA and 207 strikeouts in 208 innings over 34 career appearances (33 starts) against the Rockies, including a 1-1 record and 3.12 ERA over four starts this season. Greinke twirled seven shutout innings against Colorado on July 5, one of four scoreless outings over his last 10 starts.

Right-hander German Marquez (10-5, 4.68 ERA) gets the start in the series opener for Colorado. Marquez is 7-0 with a 2.98 ERA over 14 career starts against the American League, including a 1-0 record and 3.46 ERA in two starts against the Astros. He allowed the Astros five runs (four earned) on eight hits and one walk with seven strikeouts over six innings on July 2 at Coors Field, getting a no-decision in a 9-8 loss.

With a 6-2 win over the Giants on Sunday at Coors Field, the Rockies claimed their first series victory since mid-July and just their fifth overall since early June.

That extended stretch of poor results knocked Colorado far down the National League wild-card standings, but given the modest records of the teams fighting for those two postseason slots, the Rockies realize that a surge could lift them back in contention just as quickly as their struggles knocked them out.

"We weren't bad; we just weren't that good, but all at the same time," Rockies right fielder Charlie Blackmon said. "And that happens over the course of a season, and the fortunate thing is maybe it looks like we'll all bust out at the same time."