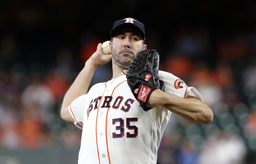 Justin Verlander has dominated the big leagues for a long time, but the Toronto Blue Jays haven't followed the trend in recent years.

Verlander will get his next opportunity to end a six-year dry spell against the Blue Jays when he takes the mound for the visiting Houston Astros in the rubber game of the three-game series on Sunday afternoon.

Verlander (16-5, 2.69 ERA) is a front-runner for the AL Cy Young Award this season, but he'd probably like to add a win against Toronto to his resume.

His memories of Toronto aren't all bad, however. Verlander threw his second career no-hitter against the Blue Jays on May 7, 2011.

Biggio, the son of Hall of Fame infielder Craig Biggio, who spent his entire 21-year career with the Astros, homered in each of the first two games of the series.

He told Sportsnet after a 6-4 win on Saturday that he's trying to remain aggressive on every pitch.

Verlander's major league career and Craig Biggio's overlapped for three seasons, but they never faced each other.

Verlander, 36, took a rare three-start winless streak into his last outing on Tuesday against the Tampa Bay Rays, ending it by throwing 5 1/3 shutout innings in the 15-1 victory.

Verlander was ejected in the sixth inning by home plate umpire Pat Hoberg, which limited his pitch count to a season-low 87.

Verlander leads the AL in innings pitched (184) and ERA and is second in strikeouts with 243.

His heavy workload hasn't shown any signs of wearing him down. Verlander is 6-1 with a 2.04 ERA since starting the All-Star Game. He has struck out 90 batters in 57 1/3 innings since the break.

The Astros hope Verlander can follow his usual course and pitch deep into the game, giving their injury-plagued bullpen a break.

Houston is expected to activate right-hander Josh James, who has missed the past five weeks with shoulder soreness.

"You can go onto any pitching staff in the big leagues and find somebody or find everybody who's had a little something this time of year," Houston manager AJ Hinch said before Saturday's loss. "It's not that surprising."

Verlander will be opposed at the start by Wilmer Font (3-3, 4.35 ERA), who has gone multiple innings in seven of his last eight appearances, as an opener for the Blue Jays.