After getting no-hit, Blue Jays hit road to face Braves 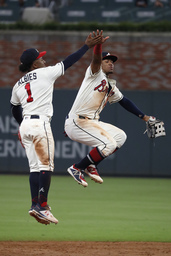 After getting no-hit by the Houston Astros' Justin Verlander on Sunday, the Toronto Blue Jays hope to distance themselves from that dubious distinction as quickly as possible when they begin a six-game road trip Monday with the series opener against the Atlanta Braves.

Atlanta Braves right-hander Mike Soroka, who hails from Calgary, Alberta, will get a second consecutive look at his home-country team. He will be opposed by Blue Jays right-hander Jacob Waguespack.

Toronto defeated Soroka (10-3, 2.44 ERA) in his most recent start on Tuesday, collecting two runs and eight hits in six innings of an eventual 3-1 victory over the Braves at Rogers Centre.

"The pitching was outstanding against a good lineup like that," Toronto manager Charlie Montoyo said. "To get them down to just one run, our bullpen was outstanding."

Verlander retired the final 26 Blue Jays in order after issuing a one-out walk to Toronto second baseman Cavan Biggio in the first inning. It marked the third no-hitter of Verlander's career and second against the Blue Jays. He also accomplished the feat against Toronto on May 7, 2011, also at Rogers Centre.

"He is who he is for a reason," Blue Jays shortstop Bo Bichette said. "He was the most aggressive pitcher I've ever faced. He kept coming after me, no matter what. A lot of guys will go through a lineup getting somebody out one way, then change it the next. He just kept attacking, kept attacking."

Waguespack (4-2, 3.93 ERA) will take his second crack at the Braves after struggling during a 9-4 loss on Wednesday.

Atlanta reached Waguespack for five runs -- three earned -- and six hits in three innings, including a solo home run off the bat of Matt Joyce.

The Braves completed a weekend series sweep with a 5-3 win over the Chicago White Sox on Sunday to earn their fourth straight victory and 12th win in 14 games. Freddie Freeman hit two homers and drove in five runs in the series finale, giving him seven hits, two homers and nine RBIs in past four games.

Atlanta is a season-high 30 games over .500 and holds a 5 1/2-game lead on the Washington Nationals for first place in the National League East.

The Nationals will come to Atlanta for a four-game set beginning Thursday.

"As much as they've been surging, we've kind of done a little surge of our own," Braves manager Brian Snitker said. "Right at the right time, too, because they're hitting on all cylinders, that's for sure."