Nats visit Braves with time running out on division hopes 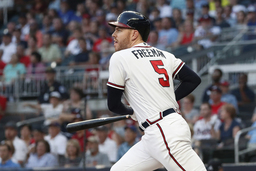 The focus for the Washington Nationals may no longer be trying to catch the Atlanta Braves. It may be hanging onto one of the National League wild-card spots.

The Nationals have dropped the first two games of their four-game series in Atlanta and now trail the Braves by nine games in the NL East. And though Nationals still hold a two-game lead for the first wild-card spot, their sudden struggles (5-5 over the past 10 games) have complicated their situation.

Voth got the nod when scheduled starter Joe Ross was scratched after he felt forearm pain during his last bullpen session. Voth has dealt with arm issues this year, too. He went on the 10-day injured list for right arm soreness fatigue in July and made a couple of rehab starts before being activated by the Nationals when the rosters expanded on Sept. 1.

"Ross threw (in) the bullpen the other day," Washington manager Dave Martinez told reporters. "He came back and said he was a little sore. I just told him, 'Hey, look, we're not going to push it. We'll treat it, get you right and see what happens.'"

Voth will be making his first start since July 16 against Baltimore, when he allowed only one run over six innings. He made a relief appearance on Sept. 2 against the New York Mets, covering 2 1/3 shutout innings with four strikeouts. He is expected to face a limit of 75-80 pitches, with Erick Fedde likely to be the next man up.

Voth has made two career appearances against Atlanta, including one start, compiling a 2.57 ERA in seven innings.

Teheran has been outstanding in his past three starts, going 2-0 with a 0.95 ERA. In his most recent start against the Chicago White Sox on Sunday, Teheran allowed two runs, three hits and four walks with five strikeouts in six innings. He had combined for 13 shutout innings in his two previous outings.

On Friday, the 2019 Braves became just the 16th team in history to have three players with 35 or more home runs in the same season. Josh Donaldson joined Freddie Freeman and Ronald Acuna Jr. when he belted a two-run shot in the seventh inning. It's the third time the Braves have done it, most recently in 2003.

"At the beginning of the year I wasn't playing well," Donaldson said. "I had confidence in myself I was going to turn it around. The fan base has been remarkable all year long, showing up and supporting us. We're winning a lot of games. It's fun to be a part of."

Teheran will be trying to help the Braves set a modern-day franchise record for most consecutive home wins. The Braves have captured 12 in a row at home, tying a mark set in 2000. Atlanta has won eight straight overall and 19 of the past 23.