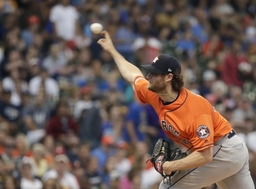 The Houston Astros will ride the red-hot right arm of Gerrit Cole into Sunday's series finale against the visiting Seattle Mariners looking for a four-game sweep.

Cole (15-5, 2.81 ERA) is 11-0 with a 2.03 ERA over his last 17 starts, posting 166 strikeouts over 110 2/3 innings during that stretch. The majors' leader in punchouts has established a franchise record with 16 double-digit strikeout performances this season, including four in succession, and enters Sunday 10 strikeouts shy of matching his single-season high of 276 set in 2018.

Whenever Cole finally tires on Sunday, Houston will have options in the bullpen, like Josh James.

What was supposed to be a set of soft landings following an extended stay on the injured list has yet to materialize for James. Thus far, the stress has served him well.

With the Astros continuing to shape their bullpen in advance of the postseason, James delivered in his third consecutive high-leverage outing Saturday, working a scoreless eighth inning with two strikeouts in the Astros' 2-1 victory over the Mariners.

James missed 34 games with right shoulder soreness prior to his recall from the 10-day IL on Sept. 1. He immediately stepped into a save situation the following day at Milwaukee and earned the win in relief Thursday in the opener of this series against the Mariners.

James has allowed one run on three hits and two walks with 10 strikeouts over four innings and tossed his name in the hat of viable late-inning options when the stakes grow exponentially in October.

"He's capable of handling all that, and he was last season and he was parts of this season, and now that he's healthy his confidence should grow," Astros manager AJ Hinch said. "He knows he's in this mix and he's expected to handle important innings. He knew going into the game he was going to be a leverage guy and he can handle it.

"He's got really good stuff, and when things happen I think he can control the inning because of the way that he can escape some issues."

Veteran right-hander Felix Hernandez (1-5, 6.02 ERA) will start Sunday as the Mariners attempt to avoid the sweep. It will mark his fourth appearance since being reinstated from the 60-day IL (right shoulder strain) on Aug. 24, with Hernandez going 0-1 with a 4.61 ERA over 13 2/3 innings.

Hernandez will make his 15th career start against the Astros. He is 4-7 with a 4.42 ERA against Houston, posting 79 strikeouts against 23 walks over 77 1/3 innings.

Dee Gordon went 3-for-3 with a stolen base on Saturday night, improving his team-best average to .286, but Seattle dropped to 1-15 against Houston this year. The Mariners have yet to win in Houston in nine tries.

"They're one of the best teams in baseball, and we play them so much, we understand what we're up against each time," Gordon said.