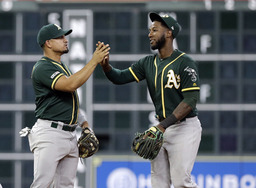 With left-hander Wade Miley producing his second consecutive abbreviated start Tuesday, the Houston Astros are in a bit of a scramble entering the third game of their four-game set against the Oakland A's.

The Astros previously designated Wednesday as a bullpen day with an opener scheduled to work against the Athletics. But with Miley allowing seven runs while recording only one out in a 21-7 loss, Houston needed four relievers to cover the final 26 outs of the defeat, opening the door for rookie right-hander Jose Urquidy to get the starting nod Wednesday at Minute Maid Park.

Urquidy needs to pitch deep enough to spare another extended outing from the relief corps.

Houston faced no such issues while dismantling the Athletics 15-0 in the series opener. The tables turned Tuesday.

"It was kind of role reversal from (Monday)," Astros manager A.J. Hinch said. "You could probably take whatever I said, copy/paste and give it to (Athletics manager) Bob (Melvin), and whatever Bob's reaction was (Monday night), copy/paste and put my name next to it."

Urquidy (1-1, 5.33 ERA) has made six appearances (five starts) for the Astros. His previous appearance on Thursday in an 11-9 win over the Seattle Mariners was his first out of the bullpen, with Urquidy allowing one run on two hits and one walk over four innings.

He threw 61 pitches after averaging just under 83 pitches in his five starts in July. Despite posting a 5.87 ERA in those appearances, Urquidy did record 24 strikeouts against only four walks over 23 innings. The Wednesday game will be his first career appearance against the Athletics.

Left-hander Brett Anderson (11-9, 4.08 ERA) will start for Oakland Wednesday. He is one victory shy of setting a single-season standard, as his current win total matches that of his rookie season in 2009.

Anderson is 7-3 with a 3.39 ERA over 14 road starts, ranking seventh in the American League in road ERA. He is 1-5 with one save and a 6.68 ERA over seven career appearances (six starts) against the Astros, including an 0-2 record and 6.10 ERA in two starts this season.

Getting a gauge of what might unfold in the third game of this series is a fool's errand. After the Astros bludgeoned Oakland in the opener Monday, the A's responded with the blowout win to hand Houston just its third home loss against a division opponent this season.

The Astros fell to 28-3 at Minute Maid Park against the American League West, with both setbacks prior to Tuesday coming by one run, including a 4-3, 11-inning loss to Oakland on July 23. That the Athletics rebounded so resoundingly from the gut punch on Monday was no shock.

"They tend to do that," Melvin said of his players. "We've had some tough games this year, whether it's extra-inning games that we lost that were tough or whatever like (Monday) night, and they seem to respond pretty well to those."

Predicting how Houston and Oakland will play Wednesday requires disregarding the first two games of this series and eliminating any search for performance trends. The bizarre set of results left Melvin stumped when asked if he's ever witnessed back-to-back finals so disparate.

"Not like that, I really can't (recall)," Melvin said. "Now the ball seems to be traveling a little bit more this year and there seem to be more runs scored, but not that big a swing where that many runs scored in two consecutive games and basically just a complete flip game. No, I can't."