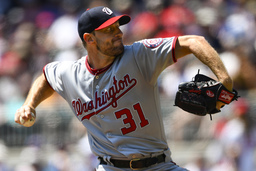 Max Scherzer will see if he can once again baffle the Atlanta Braves on Friday and help the Washington Nationals continue their quest to nail down a National League wild-card spot.

The Braves and Nationals play again for the second straight week, this time a three-game series in Washington. The Braves won three of four games against the Nationals last weekend.

The Braves enter Friday's game with a magic number of eight to win their second straight NL East title. Atlanta (91-57) has an 8 1/2-game lead over Washington; the Braves are coming off a four-game series split in Philadelphia and lost 9-5 on Thursday.

Washington (81-64) holds a 3 1/2-game lead for the first wild card. The Nationals just won two of three games against the American League Central-leading Minnesota Twins and prevailed 12-6 on Thursday.

Scherzer (10-5, 2.56 ERA) will be opposed by rookie Mike Soroka (11-4, 2.67), a rematch of Sunday's game that Washington won 9-4 in Atlanta. Scherzer allowed one run in six innings that afternoon, while Soroka was roughed up early before settling down.

Soroka is looking for his first career win against the Nationals. In four starts against Washington, all of them coming this season, Soroka is 0-2 with a 3.86 ERA. Over his last seven starts, Soroka is 1-2 with a 3.43 ERA.

Atlanta hopes to get right fielder Nick Markakis back this weekend. The veteran has been out since July 26 with a fractured left wrist. Markakis took live batting practice on the field Wednesday and Thursday.

"He did everything -- ran the bases, slid, hit again. He was good," Atlanta manager Brian Snitker said. "We'll evaluate (Friday) when we get to D.C. and see how he is, but everything went great. We'll just wait and see when he shows up how he feels."

When Markakis does return, he is expected to play left field. This will allow the team to keep the hot-hitting Matt Joyce in the lineup. Joyce is hitting .351 with five homers in 30 starts, most of them since Markakis was injured. Markakis will return to right field when Joyce sits against left-handed starters.

Washington got a boost two weeks ago when veteran Ryan Zimmerman was activated off the injured list because of plantar fasciitis. He has three homers and 10 RBIs in six starts since his return. In 197 career games against the Braves, Zimmerman has 30 homers and 126 RBI.

"When he hits the ball hard the other way and up the middle, he's really good," Nationals manager Dave Martinez said. "The key for him is to utilize the other side of the field."