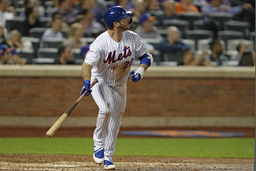 The New York Mets proved they were still playoff contenders this week by sweeping a four-game series from the Arizona Diamondbacks. Beginning Friday, the Mets have to prove it all over again, this time against the best team in the National League.

The Mets will look to continue their climb in the NL wild-card race when they host the NL West-leading Los Angeles Dodgers in the opener of a three-game series.

Both teams earned wins Thursday, when the host Mets routed the Diamondbacks 11-1, and the visiting Dodgers edged the Baltimore Orioles 4-2.

The sweep of the Diamondbacks continued the latest resurgence for the Mets (76-70), who were tied for the second-worst record in the NL at the All-Star break but raced into wild-card contention by going 15-1 from July 25 through Aug. 10.

The Mets seemed to fall out of the race when they went 3-8 from Aug. 23 through Sept. 3. But New York has won six of its last eight to climb within two games of the Chicago Cubs and Milwaukee Brewers, who share the NL's second wild-card spot.

Of course, the three teams the Mets have faced over the last eight games -- the Diamondbacks, in addition to the Washington Nationals and Philadelphia Phillies -- aren't exactly the Dodgers (95-53), who clinched their seventh straight NL West title on Tuesday.

The Dodgers are seeking their third straight NL pennant and will roll out their best pitchers this weekend. Cy Young Award candidate Hyun-Jin Ryu is scheduled to start Saturday, followed by budding ace Walker Buehler.

But the Mets are answering with their own formidable trio. Reigning Cy Young Award winner Jacob deGrom is slated to face Ryu on Saturday, while Zack Wheeler, who has allowed one run in each of his last three starts, is scheduled to pitch Sunday.

"We have our hands full -- we've got Kershaw, Ryu and Walker," Mets manager Mickey Callaway said Thursday afternoon. "And they have their hands full with who they drew as far as starters. So we have to go out there and play like we did this series."

The Mets will likely encounter an ornery Kershaw, who is looking to snap a three-start slump in which he's gone 0-3 with a 6.19 ERA. The future Hall of Famer endured his shortest start of the season in his most recent appearance Sept. 6, when he allowed three runs over four-plus innings as the Dodgers fell to the San Francisco Giants 5-4.

"You just never want to come out of a game, especially that early," Kershaw told reporters. "Just a frustrating game."

Syndergaard didn't factor in the decision in his most recent start Sunday, when he gave up four runs over five innings in the Mets' 10-7 loss to the Phillies.