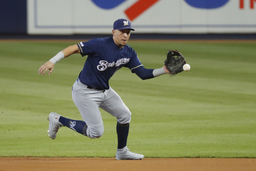 The Cardinals (82-64) lead the NL Central by four games over the Brewers and Chicago Cubs, both at 78-68 and tied for the league's second wild-card slot.

"It's an opportunity and challenge for everybody in this clubhouse," Moustakas told reporters. "You guys see what Yeli's able to do and what he's been able to do the last couple of seasons, having another MVP-type of season. It hurts a lot to lose him, but at the end of the day, we've got to find ways to win."

The Brewers just swept the Miami Marlins in a four-game series to extend their winning streak to seven games, tying their season high.

"If the season ended today, I'd be a little happier," Brewers manager Craig Counsell told reporters after Milwaukee won 3-2 Thursday. "Look, we've got whatever we've got left. It's not a one-game season; it's 16 left. We've got a lot of teams around us. There's teams that are still ahead of us that are within reach, and we'll keep shooting for that."

Pitcher Adrian Houser (6-5, 3.59 ERA) will start Friday's game for the Brewers. He faced the Cardinals on Aug. 21 and 27, allowing just one earned run each time as the teams split those games.

He is 1-1 with a 4.40 ERA in three starts against the Cardinals this season, and 1-1 with a 3.63 ERA in five career games against them, including two relief appearances.

But Houser worked just 8 1/3 innings in his last two starts, allowing four runs on nine hits and three walks against the Houston Astros and Chicago Cubs.

In his last two starts against Milwaukee, on Aug. 21 and 26, Wainwright allowed seven runs on 14 hits and seven walks as the teams split those games.

But Wainwright has pitched brilliantly lately, winning at home against the San Francisco Giants on Sept. 2 and on the road against the Pittsburgh Pirates on Saturday. He allowed just one run in 14 innings in those two starts.

"It matters to me that I'm out there performing and leading this team, when I'm out there on the mound, to a win," Wainwright told reporters. "That pumps me up. We're playing meaningful baseball right now. I'm out there contributing and helping us win those games. That means a lot to me."

The Cardinals lost two of three games to the Rockies in Colorado this week, but they have gone 24-9 since Aug. 8