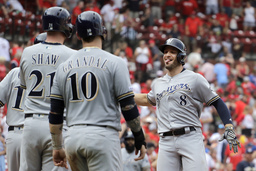 Milwaukee Brewers manager Craig Counsell dodged a question late Sunday afternoon about how favorable his team's schedule is down the stretch. But it may not matter who the Brewers face if they play as well in their final 13 games as they did during the 10-game stretch that ended Sunday.

The Brewers will look to continue their late-season surge in both the National League Central and NL wild-card races Monday night, when they begin the final homestand of the season by hosting the San Diego Padres.

Right-hander Zach Davies (9-7, 3.77 ERA) is scheduled to take the mound for the Brewers against Padres right-hander Garrett Richards (season debut), who will be making his first appearance on a big league mound since undergoing Tommy John surgery in July 2018.

The Brewers capped a wildly successful road trip Sunday, when Ryan Braun hit the go-ahead grand slam with two outs in the ninth inning of a 7-6 win over the host St. Louis Cardinals. The visiting Padres fell to the Colorado Rockies, 10-5.

The win capped a 6-1 road trip for the Brewers (80-69) and was their ninth win in the last 10 games, a span in which Milwaukee lost reigning NL Most Valuable Player Christian Yelich to a season-ending fractured kneecap but moved within one game of the Chicago Cubs for the second wild card and within three games of the first-place Cardinals in the NL Central.

The Brewers were five games back of the Cubs and 7 1/2 games behind the Cardinals following Milwaukee's 10-5 loss to Chicago on Sept. 5.

The series opener Monday marks the beginning of a stretch in which the Brewers face four teams -- the Padres in addition to the Rockies, Pittsburgh Pirates and Cincinnati Reds -- that finished Sunday a combined 63 games under .500.

"'Favorable' is for everybody else to figure out," Counsell told reporters. "We have a game in front of us. It's hard to win them, and we have to do everything we can to win them."

The schedule the rest of the way isn't nearly as comfortable looking for the Padres (68-81), who will be assured of a ninth straight losing season with their next defeat. San Diego's final three opponents -- the Brewers as well as the Arizona Diamondbacks and NL West champion Los Angeles Dodgers -- enter Monday a combined 56 games over .500.

The good news is the Padres will get an idea what they have in Richards as they look towards next season. Richards, who played the first eight seasons of his career with the Los Angeles Angels before signing a two-year deal with San Diego in December, could occupy the second spot in the rotation behind rookie phenom Chris Paddock.

"We look at it as, get him on the mound, make sure he knows going into the offseason that he's ready to go and he doesn't have a question in the back of his mind," Padres manager Andy Green told reporters.

Davies didn't factor into the decision in his most recent start last Wednesday, when he allowed three runs over 4 1/3 innings as the Brewers beat the Miami Marlins, 7-5.

Davies is 3-0 with a 3.58 ERA in five career starts against the Padres. Richards has never faced the Brewers.