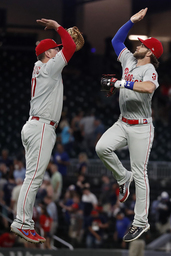 The Philadelphia Phillies have done a good job this week preventing the Atlanta Braves from clinching their second straight National League East championship.

On Thursday, the Phillies will go for a series sweep when they play the host Braves for the final time this season. Philadelphia has won the first two games of the series and ensured the Braves won't be able to sew up the title until at least Friday.

A 4-1 win on Wednesday kept Philadelphia (78-72) alive in the chase for the second NL wild card, as the Phillies now sit three games back of the Chicago Cubs and Milwaukee Brewers. Philadelphia has won 10 of 18 games against Atlanta.

The Braves (93-60) have lost three in a row but still hold a nine-game lead over Washington in the NL East. Atlanta's magic number was reduced to two after Washington was beaten by St. Louis earlier in Wednesday.

Nola is coming off an impressive outing against the Boston Red Sox last Saturday. He received no decision but gave up only one run in seven innings, striking out nine in a 2-1 Phillies loss.

"We have to find ways to scratch out runs for Nola," Phillies manager Gabe Kapler said after that game, according to the Philadelphia Inquirer. "It's tough. It's definitely something that we have to correct."

Soroka has made two starts against the Phillies this season but does not have a decision. He has posted a 4.82 ERA in the two games, giving up 17 hits in 9 1/3 combined innings. He last faced Philadelphia on July 26 and did not figure in the decision after he allowed one run on eight hits in 4 2/3 innings. The Phillies won the game 9-2.

Soroka was outstanding in his most recent start, last Friday against in Washington. He avenged an earlier loss to Max Scherzer and outpitched the veteran to earn the win. Soroka fired six shutout innings, giving up one hit and walking three while striking out four.

"Braves fans should be excited to have this guy on their side for a while," veteran Atlanta outfielder Nick Markakis said. "Soroka threw as well as I've seen him throw, especially against a lineup like that. As usual, he commanded all his pitches and threw them in any count. It was fun to watch."

Soroka is second in the National League in ERA behind the Los Angeles Dodgers' Hyun-Jin Ryu (2.35).