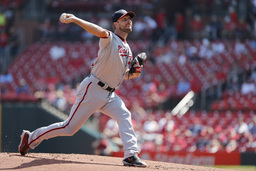 The Washington Nationals have a chance to clinch a playoff berth after a one-year absence -- and eliminate the Philadelphia Phillies at the same time.

The Nationals (86-69) and Phillies (79-76) will meet for a day-night doubleheader in Washington on Tuesday, the day game serving as a makeup of a contest rained out on June 18.

Washington, which reduced its magic number to three with a 6-1 win in the series opener Monday night, leads the Milwaukee Brewers by a half-game for the top wild-card spot -- and home field for the one-and-done playoff game. A doubleheader sweep paired with a Chicago Cubs loss at Pittsburgh would seal a playoff berth for the Nationals.

"Let's just take care of tomorrow," Nationals manager Dave Martinez told MASN.com after the Monday victory. "Just win the first game and go from there. It's been that same message almost the whole year: 'Let's go 1-0,' you know. That's how we got to this point. I don't want them to think too far ahead."

The Phillies will use right-handed reliever Blake Parker (3-2, 4.40) as the opener in Game 1 while right-hander Aaron Nola (12-6, 3.75) is expected to start Game 2 as Philadelphia faces elimination with a loss.

The Nationals have won five straight against the Phillies at Nationals Park.

Ross hasn't pitched since Sept. 2 due to a forearm injury. He made five starts in August, going 3-0 with a 1.05 ERA as Washington won all five. He is 2-0 with a 3.38 ERA in five games (three starts) in his career versus the Phillies.

Scherzer is 1-2 with a 4.50 ERA since returning from the injured list Aug. 22 after missing nearly a month with a strained back.

Last time out, he was charged with five runs on seven hits over 6 2/3 innings of a 5-1 loss in St. Louis on Wednesday, but he deserved a better fate. He allowed two run over the first six innings, but left fielder Juan Soto lost a seventh-inning fly ball in the sun, and it fell for a double. St. Louis ultimately added three more runs, two on a homer by former Nationals catcher Matt Wieters.

Nola hasn't won since Aug. 20. His last time out, he gave up five runs on nine hits -- including two homers -- in five innings of a 5-4 loss to the Braves in Atlanta on Thursday.

"I'm not going out there to try to lose," Nola said. "I'm going out there and trying to compete. You know, I'm leaving balls over the plate and guys are taking good swings on it."

The Nationals had some good swings early in Monday night's game as Adam Eaton, Yan Gomes and Trea Turner hit solo homers, one in each of the first three innings, against losing pitcher Zach Eflin.

Anthony Rendon drove in his 121st and 122nd runs of the season.