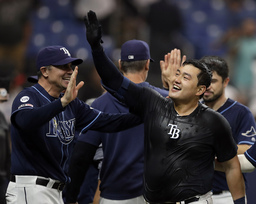 For the Tampa Bay Rays, the past few weeks have been defined by close games and dramatic victories. The ability to win a majority of those games is keeping the Rays in the second American League wild-card spot.

After getting a marathon win Tuesday, the Rays hope to record another victory Wednesday night when they face the New York Yankees in the finale of a two-game series in St. Petersburg, Fla.

The Rays (94-64) will enter their final regular-season home game leading the Cleveland Indians by one half-game for the second AL wild card. They are just a half-game behind the Oakland Athletics for the first wild card.

"We're always focused on every single game," Tampa Bay first baseman Ji-Man Choi said through a translator in his on-field interview after hitting the game-winning homer in the 12th inning Tuesday. "We're just focused on getting that wild-card spot. So, we're going to do our job to get that spot."

Tampa Bay has held one of the wild-card positions for 23 straight days and has 18 victories in its past 24 games. The Rays have six one-run wins and five extra-inning wins in that stretch.

Tampa Bay is 6-13 against the Yankees but claimed a 2-1 victory in the series opener when Choi went deep. Choi has hit five of his 18 homers in his past 11 games, and his second career walk-off homer occurred a day after he sparked a six-run fourth Monday against Boston with a home run.

The Yankees (102-56) could see the Rays in the AL Division Series but will only face the winner of the wild-card game if they secure the best record. The Yankees are 12-7 in their last 19 games and trail the Houston Astros (103-54) by 1 1/2 games in the chase for the AL's top mark and home-field advantage throughout the playoffs.

New York also enters Wednesday one homer away from becoming the first team in major league history to hit 300 in a season. The Yankees have two more homers than Minnesota after Cameron Maybin homered in the third inning Tuesday.

Of bigger concern for the Yankees is Gio Urshela's left hand. He was hit by a Diego Castillo fastball in the sixth and exited an inning later. The Yankees said Urshela had a bruised left hand and that X-rays were negative.

The Yankees will hope to produce some better offense after striking out 13 times against nine pitchers Tuesday.

"They can be really aggressive with creating matchup advantages early and often in the game," Boone said. "So they did a good job of that of putting some guys in really successful short lanes and we were able to do the same thing. It made it obviously tough sledding for the offense today."

Morton's last start was in one of Tampa Bay's walk-off wins when he allowed two runs on five hits in 6 1/3 innings Friday during a 5-4, 11-inning win over Boston.

The Yankees will start Jonathan Loaisiga (2-1, 4.25 ERA) and are expected to use veteran J.A. Happ as a reliever at some point as they did with CC Sabathia on Tuesday.

Loaisiga is 0-1 with a 5.73 ERA in his three starts this season and is making his first start since May 8 against Seattle. He has thrown two innings in each of his past three appearances and has a 2.89 ERA in six outings this month.

The 24-year-old right-hander is 1-0 with a 0.00 ERA in two career appearances (one start) against Tampa Bay, both last year.