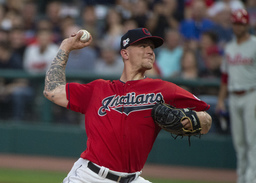 The Cleveland Indians travel to Washington for the season's final weekend needing to win and get help to sneak into the second American League wild-card spot.

After dropping two straight games to the Chicago White Sox, the Indians (93-66) trail the Tampa Bay Rays (95-64) by two games with three to play. The Rays visit the Toronto Blue Jays for their final three games.

Cleveland's task is made harder because the Nationals have a lot to play for. Washington (90-69) holds a one-game lead for the top spot in the National League wild-card race and home-field advantage in Tuesday's wild-card game.

The Milwaukee Brewers (89-70) trail Washington by one game and also trail St. Louis (90-69) by a game for the NL Central title, creating a potential scenario where all three teams could be tied after Sunday.

Washington rolls into the weekend on the heels of the franchise's first five-game series sweep, completed with a 6-3 win over the Phillies on Thursday. The Nationals won their 90th game of the season after starting out 19-31.

"Our goal leaving spring training is to get to 90 wins," manager Dave Martinez told MASN.com. "Typically, 90 wins gets you into the playoffs, so I like that number. But let's not end there. Let's try to get to 91 tomorrow."

In four games since coming off the injured list, Voth has a 2.12 ERA with 19 strikeouts in 17 innings. In his last time out, he gave up a run on three hits over five innings of a no-decision against the Marlins.

Plesac threw a shutout on Sept. 10 against the Los Angeles Angels. The Indians skipped the rookie's next turn, but he allowed four runs on five hits and two walks in 4 1/3 innings on Sept. 21 against the Phillies.

"I was just trying to find that rhythm, that tempo," Plesac told MLB.com. "Delivery was kind of inconsistent the whole game."

"The natural feeling is to feel sorry for yourself," Indians manager Terry Francona told the Plain Dealer regarding Cleveland's plight. "We can't do it. We haven't done it yet, and until someone tells us we've got to go home, we have to keep grinding. We have to find a way."

In Washington on Thursday, Stephen Strasburg pitched six innings for his NL-leading 18th win. Strasburg (18-6) allowed one run on four hits over six innings. He didn't walk a batter and struck out 10, setting a personal high for strikeouts in a season (251), topping the 242 he recorded in 2014.

Michael A. Taylor had three hits including a home run, and Asdrubal Cabrera homered and doubled for Washington.

Strasburg allowed three or fewer runs in 24 of his 33 starts and has made a strong case to be the starter in Tuesday's wild-card game, an assignment that is likely to go to Max Scherzer. Strasburg and No. 3 starter Patrick Corbin could pitch in relief.

"We're still going to see how it all plays out," Martinez told MASN.com. "Right now, we're just taking things one day at a time. I told the boys: 'Just keep playing good baseball. Don't worry about what other teams are doing. Just keep showing up every day and playing good baseball, and things will take care of itself.'"