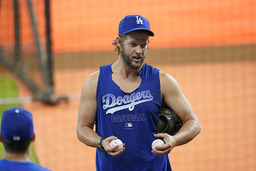 Los Angeles Dodgers ace Clayton Kershaw makes his season debut Sunday when the Dodgers and Arizona Diamondbacks meet in the finale of a four-game series in Phoenix.

Kershaw was reinstated from the injured list Saturday. A stiff back from working out two days before he was scheduled to pitch the season opener kept him from making his ninth career Opening Day start.

The three-time Cy Young Award winner and eight-time All-Star is 16-10 with a 2.84 ERA in 33 career starts against the Diamondbacks, but last season was 0-1 with a 7.36 ERA in two starts against Arizona, both at Chase Field.

"Just knowing he's going to make a start, his debut for '20, I know he's thrilled, the players are excited for him," Dodgers manager Dave Roberts said. "There's just a different demeanor in the clubhouse on his pitch day."

The Dodgers can take three of the four games with their division rivals with a win Sunday, and have to feel confident after an 11-2 win Saturday night, in which they hit four home runs without slumping 2019 NL MVP Cody Bellinger in the lineup. Roberts also played it safe with regulars Mookie Betts and Corey Seager, removing them from the game to rest minor injuries.

Right-handed pitcher Mitch White is with the team after being called up from the Dodgers' alternate training site. His first appearance will be his major league debut.

The Diamondbacks' Merrill Kelly (1-0) looks to build off a strong start to 2020. He earned the win on July 28 against the Texas Rangers, allowing a run on three hits with seven strikeouts in 7 2/3 innings.

Expect Arizona manager Torey Lovullo to have Christian Walker in the lineup. Walker is 5-for-11 with four home runs in his career against Kershaw.

But the Diamondbacks, having lost three of four, have struggled to avoid big innings for opponents. The Dodgers scored three, five and three runs in three separate innings on Saturday.

Lovullo said he sees his team pressing, with individuals trying to do too much because they want to win badly.

"That's not the way baseball works. Everything's linked, everything's connected. We've just got to get to that point of relaxation and then execution," Lovullo said.

The pregame work ethic has been there and the practice habits are good, but it has to translate to the field, Lovullo explained.

"We're going to get this thing turned around. I'm a firm believer in that," he said. "Even though we're grinding right now, we're going to continue to do so until we get it right."

The Diamondbacks on Saturday optioned one of their promising young players, utility man Josh Rojas, to their alternate training site and called up infielder-outfielder Andy Young, who has yet to make his big league debut.