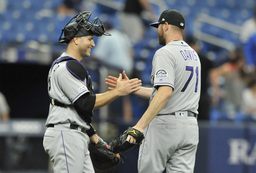 Iannetta homered with one out in the 11th, and the Rockies stopped a four-game losing streak with a 1-0 victory over the Tampa Bay Rays on Wednesday.

"Everyone outside the clubhouse was hitting the panic button," Iannetta said. "I think everyone wanted everyone to be traded, sent down, contracts reneged, shot by firing squad. Everyone was ready to jump off the bandwagon. It's fun. We have a much more level head than that. We take it one game at a time."

The catcher entered in the eighth and hit his sixth extra-inning homer - his fourth in the 11th inning or later.

"It's just fun to hit a homer. It's fun to win," Iannetta said as loud music filled the victorious Rockies clubhouse - a contrast to Colorado's mostly silent bats.

Iannetta connected on a hanging slider with an 0-2 count against Chaz Roe (0-1), the Rockies' first hit since Raimel Tapia's leadoff single in the fifth and second run in 41 innings.

"I've seen it before, to get out of a funk or to win a game, you need a shutout," Rockies manager Bud Black said. "That was a good one. It was a throwback game. It was awesome."

Iannetta's first home run of the season gave the win to Wade Davis (1-0), who got four outs to complete a six-hitter.

Tampa Bay, which entered with a five-game winning streak, gave up one run or none for a team-record fifth straight game. The Rays have yielded 11 runs in seven games this season.

"We can pitch, there's no denying that," Rays manager Kevin Cash said.

The Rays appeared to take a 1-0 lead with two outs in the seventh on Willy Adames' bunt single with runners on second and third, but the original safe call by Eric Cooper was overturned after a video review showed third baseman Nolan Arenado's throw to first baseman Ryan McMahon after a bare-hand pickup was in time for the out. Tampa Bay also failed to score after loading the bases in the sixth and ninth innings.

"You can mark a lot of different plays that kept the game going," Black said.

Tampa Bay went 0 for 10 with runners in scoring position and left 13 on, including at least two in every inning from the sixth through 10th.

"There were some chances, we just didn't capitalize," Cash said.

Rays right-hander Charlie Morton gave up four hits in six innings. A 15-game-winner with Houston last season signed by the Rays to a $30 million, two-year deal, he allowed two runs over five innings in his debut last Friday, a 4-2 win over the Astros.

Rockies: Marquez was hit on the lower left leg with a hard comebacker by Kevin Kiermaier in the fifth but stayed in the game.

Tampa Bay plays Friday against one-time Rays' star Evan Longoria and the San Francisco Giants. Longoria, traded in December 2017, is Tampa Bay's career leader in games played (1,435), home runs (261) and RBIs (892). "This organization kind of arrived right about the time that Longo got here along with some other guys," Cash said.

Adames also struck out on a failed two-strike bunt attempt with runners on first and third with one out in the ninth. He was hitless in five at-bats and is 1 for 23 (.043) overall, including 13 strikeouts. "There's going to be ups and downs, and I'm going to keep working hard," Adames said.

Rockies: LHP Tyler Anderson (0-1) is to take the mound for the home opener Friday against the Los Angeles Dodgers and RHP Kenta Maeda (1-0).