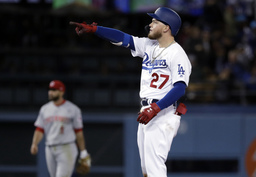 LOS ANGELES (AP) Alex Verdugo carries himself as though he's an everyday player, and lately he's been producing like one.

The 22-year-old outfielder tied his career high with three RBIs and helped the Los Angeles Dodgers beat the Cincinnati Reds 6-1 on Tuesday night for their third straight win.

Verdugo is batting .370 with two home runs and 10 RBIs, having hit safely in six of seven starts this season. He's getting opportunities because of injuries, although he'd prefer they came another way.

"Driving in runs at this level is a big thing," he said. "For me, it's just fill in wherever I go. Control what I can control."

Verdugo is staying patient while waiting his turn at becoming a regular.

"He's just showing glimpses of what he's capable of," said teammate Joc Pederson, who hit a two-run homer for the second straight game. "Not getting consistent at-bats throws a wrench into it, but he's making the most of it."

Verdugo had a two-run double in the seventh inning. He reached on an infield single that scored Corey Seager in the first.

"He brings a lot of energy and skill," Dodgers manager Dave Roberts said. "It's fun to see that youthful enthusiasm and guys rally around him."

Pederson's eighth homer of the season just made it over the wall in right field with two outs in the second, similar to the location of his first career walk-off shot in the bottom of the ninth that rallied the Dodgers to a 4-3 win Monday.

The Dodgers lead the National League with 37 homers, tying the 1956 Cincinnati Reds for fourth-most through 19 games. Los Angeles has gone deep in 17 of 19 games.

The team has homered at Dodger Stadium in 31 consecutive games, one shy of tying the major league-record streak for home games set by the 1999 Colorado Rockies.

The Dodgers rapped out 13 hits. They got to Tyler Mahle (0-1) early, with four runs and eight hits over the first two innings. The right-hander gave up 11 hits in six innings, struck out three and walked none. He was charged with a balk in the second.

Kenta Maeda (3-1) allowed one run and four hits in 6 2/3 innings. He struck out five and walked three. The right-hander escaped a bases-loaded jam by striking out Mahle to end the fourth.

"It looks like he has made some improvements to his pitching style," Reds star Joey Votto said. "His changeup is improved. He seems to have a much better feel for avoiding damage. He kept us off balance and he seemed to be one step ahead."

Enrique Hernandez stroked an opposite-field RBI single in the second that extended the lead to 4-0.

Votto got his 900th career RBI in the third and struck out twice in four at-bats hitting leadoff for the second time in his career.

Votto's double down the right field line scored Mahle from second and left the Reds trailing 4-1.

Former Dodgers Yasiel Puig and Matt Kemp were a combined 1 for 8 with one strikeout.

The Reds have dropped six in a row on the road.

Dodgers: OF-1B Cody Bellinger tested his sore right knee with some pregame running in the outfield. He wasn't in the lineup after being hit by a 95 mph fastball a night earlier but is expected to return Wednesday. His absence ended the club's longest streak of consecutive regular-season games played at 113. ... 3B Justin Turner was given the night off. He fouled a ball off his ankle while working in the batting cage and it caused his left hamstring to tighten up. He should return Wednesday. ... LHP Hyun-Jin Ryu (left groin strain) won't need a rehab start before returning to the rotation sometime in the next week.

With Ryu's impending return, LHP Julio Urias (0-1, 5.27 ERA) will go to the bullpen after making his start at Milwaukee on Thursday. When LHP Rich Hill (left knee strain) comes back to complete the rotation, RHP Ross Stripling will join the bullpen.

Reds: RHP Sonny Gray (0-2, 2.03 ERA) makes his 150th career start in the series finale Wednesday. In his three starts this season, the Reds have hit .189 and been shut out twice. They've scored one run when Gray has been in the game.