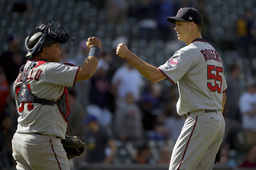 BALTIMORE (AP) There will be plenty of games this season in which the Minnesota Twins use the long ball to win. When that doesn't happen, they're happy to go with Plan B.

Such was the case Sunday against the Baltimore Orioles, when Minnesota produced just enough runs without the benefit of a home run and got some clutch pitching from the bullpen in a 4-3 victory that cemented a three-game sweep.

After hitting 11 homers in a doubleheader Saturday, the Twins found a different way to score. Nelson Cruz worked his way around the bases after being hit by a pitch, Willians Astudillo drove in a run with a sacrifice fly and a botched popup led to a pair of unearned runs.

"You never know how you come back after a big offensive night," manager Rocco Baldelli said. "Obviously it wasn't like the night we had (Saturday) but it was still good. Guys grinded through it and we scored just enough."

Kyle Gibson (1-0) gave up two runs and five hits over six innings, walking none and striking out six. The right-hander retired the last eight batters he faced.

"I get pretty frustrated when I walk guys or give up homers," Gibson said. "If I execute my pitches, I'll keep the ball in the park."

Trevor Hildenberger worked out of a bases-loaded jam in the eighth before Taylor Rogers did the same in the ninth.

With closer Blake Parker ailing, Rogers gave up an RBI double to Jonathan Villar before issuing an intentional walk to Trey Mancini to load the bases with two outs. After going to 3-0 on pinch-hitter Pedro Severino, Rogers secured his third save with a fly ball to right.

It was only the second time this season that the Orioles did not give up a home run. They allowed a major league-high 57 in their first 22 games.

And still, the Twins won.

"It took several of our players to come up with big, big efforts," Baldelli said. "That was a true team effort."

Baltimore starter Dylan Bundy (0-3) allowed four runs, two earned, and seven hits in six innings. Although he lost his third straight start, he kept the ball in the park after allowing seven home runs in his previous four outings.

"Bundy was good. He gave us six really good innings, kept us in the game," manager Brandon Hyde said. "Pitched well against a good lineup."

"We were just a run short," Hyde said. "We had opportunities in the eighth, didn't cash in, and put together a nice rally in the ninth inning. It just didn't happen."

Baltimore's woes began on the second pitch of the game, when Jorge Polanco lifted a popup that Dwight Smith Jr. lost in the sun for a three-base error. Astudillo followed with a double and C.J. Cron hit an RBI single.

Smith got those unearned runs back with a two-run single in the third, making it 3-2 before Astudillo delivered a sacrifice fly in the fourth.

The Orioles designated right-hander Mike Wright for assignment and recalled Gabriel Ynoa from Triple-A Norfolk. Wright was 0-1 with a 9.45 ERA, and Baltimore needed a fresh arm after Saturday's doubleheader. Hyde said Wright had good stuff but "had a lot of misses in the middle of the plate." Wright gave up five homers and 14 runs in 10 appearances this season.

Twins: OF Max Kepler and Parker missed the entire series because of a stomach bug. Kepler insisted it was food poisoning, noting, "I think it was some fish."

Orioles: Smith left in the seventh inning with right quadriceps tightness. "Honestly, the way I feel I probably could play (Monday)," he said. ... RHP Nate Karns (right forearm strain) lasted only 18 pitches in his rehab assignment Saturday with Norfolk. Hyde said team doctors would check to see if his arm needs more rest.

Twins: RHP Jake Odorizzi (1-2, 4,76 ERA) helps the Twins open a three-game series in Houston on Monday night. He is 3-1 with a 2.12 ERA in five career starts against the Astros.