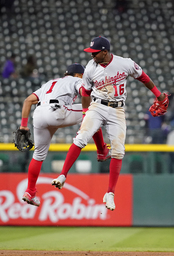 Corbin recovered from giving a homer in the second pitch six strong innings, Victor Robles hit a three-run double, and the Washington Nationals beat the Colorado Rockies 6-3 on Tuesday night.

"I knew two runs wasn't going to win the game and I only gave up two early," Corbin said. "I knew our offense was going to put something on the board. It's tough to keep runs off the board in this ballpark generally, so if I just minimized the damage and kept the score where it was, we'd have a good shot to be right back in it."

Corbin (2-0) was right on that score. He gave up three runs - two earned - and five hits, and had a key base hit in Washington's four-run third inning that allowed the Nationals to gain the lead. He struck out six and walked one, coming out on top at Coors Field, where he has had some tough outings in the past. He entered with a 6.55 ERA in 11 previous games at Colorado, including 10 starts.

Sean Doolittle got the last four outs for his third save.

"Corbin was awesome again," Doolittle said. "Having pitched here a bunch, I think he handled it really well. They took an early lead and then he came back out and got a single and started a rally. I thought that was pretty cool. His pitch count was getting up there but he went back out and finished that sixth inning and that was huge for us, as a bullpen and as a team. We needed a start like that to bounce back after (Monday's) loss."

Washington scored two runs in the top of the ninth when Rockies reliever DJ Johnson walked Juan Soto with the bases loaded before hitting Howie Kendrick with a pitch.

Jeff Hoffman, recalled from Triple-A Albuquerque to start in place of injured Kyle Freeland (finger blister), sailed though the first two innings only to run into trouble in the third. Corbin singled to lead off the third, starting a string of four straight hits capped by Robles' three-run double.

"I was under control until things got out of hand in the third," Hoffman said.

The hit parade prompted a mound visit from manager Bud Black, who spoke earlier in the day of the need for Hoffman to go fairly deep into the game after his bullpen saw four relievers throw six innings the night before.

"He reiterated the confidence he has in me," Hoffman said, when asked what Black told him. "He told me my stuff was fine and that I had to slow down a little bit. That got me back on track."

Hoffman (0-1) retired the next six batters he faced, though Kendrick's sacrifice fly in the third boosted the Nationals' lead to 4-2. Robles put himself in position to score on the sacrifice fly with a daring steal of third.

"I was able to pick up the sign from the catcher and read that it was going to be a breaking pitch, so I decided to go," Robles said through a translator. "I got a good jump on the pitch."

Hoffman also benefited from two exceptional plays in the field in fourth on a leaping catch at the wall by center fielder Ian Desmond that robbed Brian Dozier of at least extra bases and a tumbling catch into the stands of Yan Gomes' foul ball by left fielder Tapia.

Colorado scored an unearned in the fifth to pull within one. Charlie Blackmon scored from second base when shortstop Wilmer Difo booted Nolan Arenado's grounder deep in the hole.

The Rockies took a 2-0 lead in the second on Tapia's second home run in two nights. McMahon was aboard with a single when Tapia drove a 1-0 offering from Corbin over the center-field fence.

Nationals: RHP Max Scherzer threw a bullpen session Tuesday and was expected to have another light throwing session on Wednesday. He remains on pace to make his scheduled start Friday after being struck under his left arm by a foul ball last Sunday against Miami. ... INF Anthony Rendon was not in the starting lineup for a third game after being hit on his left elbow by a pitch at Miami on Saturday.

Rockies: LHP Freeland was scheduled to throw a bullpen session Wednesday as he continues working his way back from a blister on his left middle finger that landed him on the 10-day injured list.