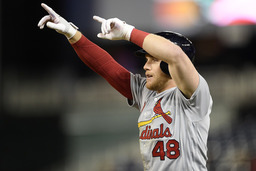 Harrison Bader homered to spark a six-run fifth as the surging Cardinals rallied past Patrick Corbin and the Washington Nationals 6-3 on Monday night in the opener of a four-game series.

"Harry got a pitch and drove it, and kind of opened it up from there," St. Louis manager Mike Shildt said.

Marcell Ozuna put the Cardinals ahead 4-3 with a two-run single. Jose Martinez had an RBI double and Yadier Molina added a run-scoring single off Corbin, who took a 3-0 lead into the fifth.

"They continued to make good at-bats," Shildt said. "We are really sincere about getting better as the game goes. This group's pretty dedicated to that."

Michael Wacha (2-0) went five innings after being activated from the 10-day injured list earlier in the day. The right-hander allowed three runs and four hits while striking out five.

Jordan Hicks pitched a 1-2-3 ninth to earn his ninth save.

St. Louis has won three straight and eight of nine.

After yielding only one hit through the first four innings, Corbin (2-1) let the Cardinals bat around in the fifth. He gave up six runs - five with two outs - in his first loss since joining the Nationals as a $140 million free agent from Arizona.

"I put myself in trouble with those couple of walks there in that inning and it kind of just led to a big inning for them," Corbin said.

Coming into the game, the left-hander had walked just six in 32 2/3 innings this season. But he issued four free passes against the Cardinals, two in the fifth inning.

Following Bader's solo homer, Corbin got Wacha to ground out but then allowed the next six batters to reach. Matt Carpenter walked and later scored on a wild pitch to Ozuna.

"Guys bounced back and scored a big six spot for us there, and the bullpen came in and shut the door like they've been doing," Wacha said. "This was a good team win."

Washington took a 3-0 lead in the second on a bases-loaded walk to Corbin and a two-run single by Adam Eaton.

Cardinals: RHP Luke Gregerson (right shoulder impingement) was set to arrive in Washington. The 34-year-old reliever began the season on a rehab assignment with Double-A Springfield, where he allowed two runs in 11 innings.

Nationals: 3B Anthony Rendon (bruised left elbow) was out of the lineup for the second consecutive game and the seventh time in eight after being hit by a pitch April 20 in Miami. Rendon tried to go in pregame warmups but was unavailable. "We're going to sit back here and re-evaluate," manager Dave Martinez said. "See what's going on (Tuesday)." ... RHP Trevor Rosenthal (viral infection), placed on the 10-day injured list Friday, left for extended spring training in Florida without a timetable for his return.

Washington is 1-9 in series openers. "We're not playing well right now and I think that's apparent," Eaton said. "When you don't play well, you don't win too many games. ... It's just been a struggle right now."

Washington recalled infielder Adrian Sanchez from Double-A Harrisburg. Sanchez was with the Nationals in early April but did not appear in a game. In the corresponding move, the team optioned RHP Erick Fedde - who pitched four scoreless innings on Sunday - to Double-A.

Nationals: RHP Anibal Sanchez (0-3, 6.00) is still looking for his first win with Washington in his sixth start of the season.