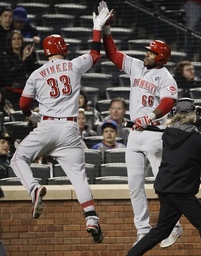 NEW YORK (AP) Jesse Winker thought back to the start of this season, when he returned from shoulder surgery and went hitless in his first 14 at-bats and 23 of 24. His Cincinnati Reds teammates told him not to worry.

Just 28 games into the season, Winker has set a career high for home runs.

He pulled a 96 mph fastball from All-Star closer Edwin Diaz over the right-center field fence with two outs in the ninth inning on a chilly Monday night, and the Reds beat the New York Mets 5-4 after wasting a four-run lead.

"The way he swings the bat, his approach, his eye, his ability to walk, there's no reason why he can't just continue to get better," Reds manager David Bell said.

Selected by Cincinnati with the 49th overall pick in the 2012 amateur draft, Winker did not reach the big leagues until 2017. He was the Reds' opening day center fielder last season and was hitting .299 with seven homers and 43 RBIs when he had season-ending surgery on July 31 to repair a torn labrum in his right shoulder. The injury had bothered him since 2014 at Class A.

"I remember diving for a ball and something happened to my shoulder and ever since then it would constantly pop out," he said.

He had 49 walks and 46 strikeouts last year, an anomaly in 21st century baseball - Winker was among just five batters with 250 or more plate appearances who had more walks than whiffs, joining Alex Bregman, Jose Ramirez, Carlos Santana and Reds teammate Joey Votto.

After hitting seven home runs in each of his first two big league seasons, Winker has eight.

"I was telling him, he's going to be great in this level," Cincinnati third baseman Eugenio Suarez said.

This was just the second homer Winker pulled. After hitting mostly first and third this year, he was moved to cleanup for the first time Monday.

"It's an evolving process," he said. "I don't think at 25 years old you want to be a complete anything."

Left-handed batters had been 0 for 15 with 10 strikeouts this year against Diaz (0-1), pitching for the third straight day for the first time this season.

"I'm ready for the highs and lows of the game," he said through a translator. "I've pitched well. Today, I was ready to take this loss because I don't think I'm going to have many more this season."

Mets starter Zack Wheeler gave up four runs, seven hits and three walks in six innings, his average fastball velocity down about 4 mph from 98 mph in his prior start. He had allowed six hits or fewer in his previous 16 starts.

Cincinnati's Tanner Roark gave up four runs, four hits and four walks in 3 2/3 innings. He was given a 4-0 lead in the second on RBI doubles by Jose Iglesias and Jose Peraza, Tucker Barnhart's run-scoring single and Suarez's sacrifice fly, all after a pair of walks.

New York closed to 4-2 in the bottom half when Wilson Ramos hit an RBI double and scored on Amed Rosario's single. The Mets tied the score with a two-out rally in the fourth that included four walks and a single by Wheeler in a five-batter span. Roark forced in a run with a four-pitch walk to rookie Pete Alonso, and Wandy Peralta followed with a four-pitch walk to Brandon Nimmo.

Cincinnati rebounded behind Winker, who raised both arms as Votto hugged him in the dugout.

While the announced crowd of 20,766 was the smallest this season at Citi Field, actual attendance appeared less than half that.

Mets center fielder Juan Lagares made a running, over-the-shoulder grab before banging into the center-field wall to rob Votto with a runner on in the seventh.

Cincinnati used its 25th batting order in 28 games for its eight position players.

On a night with a 52-degree temperature at game time, Mets leadoff hitter Jeff McNeil needed to pound his bat into the dirt repeatedly in the first inning to remove a stuck donut.

Reds: LHP Alex Wood is still bothered by his back. Sidelined since spring training, Wood threw a bullpen last week and "didn't respond well the next day. The days after that he was doing better," Bell said. Wood was examined again to "make sure he's going in the right direction," Bell said.

Mets: 2B Robinson Cano likely will miss a couple of games with a swollen left hand after getting hit by a pitch Sunday from Milwaukee's Gio Gonzalez. An MRI was negative. ... LHP Justin Wilson (left elbow soreness) threw a bullpen. He is eligible to come off the injured list Tuesday, but the Mets likely will wait until Wednesday at the earliest, manager Mickey Callaway said.