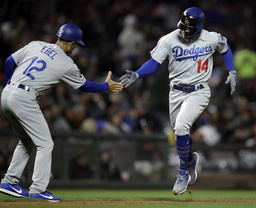 SAN FRANCISCO (AP) David Freese had to wait to celebrate his first homer in more than two weeks. There was no doubt about Justin Turner's shot.

"The thing about those two guys is that they still compete every time they're in the box. They have a plan," Dodgers manager Dave Roberts said. "For them to get rewarded is big for their confidence. Freeser, that homer, the game could have went either way there. The homer flipped it."

Buster Posey had an RBI double for San Francisco.

A glitch in the replay system briefly delayed the start of the game. Both teams retained their managerial challenges and were given unlimited crew chief reviews as a result of the technical issues.

Freese homered for the first time since April 11, driving a 3-2 pitch from Drew Pomeranz (1-3) deep to right in the fourth. He paused between first and second base as the ball ricocheted back onto the field, unsure of the call until first base umpire Tim Timmons signaled home run.

"I made a bad pitch and it cost us," Pomeranz said.

Television replays showed it just hit above the brick facade in right. Freese entered the series with the Giants in a 0-for-18 funk. He singled as a pinch hitter on Monday and added two more hits and a walk on Tuesday.

"From what I hear it was by inches. It just popped that top," Freese said. "I knew I hit it good. You never know what that wind's going to do up there."

Turner homered leading off the seventh.

"I just feel relieved to finally get that out of there," Turner said. "I can stop talking about being the only guy on the team without a homer."

Chris Taylor and Austin Barnes hit consecutive two-run doubles off Ty Blach in the sixth. Hernandez capped the inning with his sixth home run, a two-run drive to left.

Blach wound up being the Giants' fall guy on a night when Pomeranz failed to make it past the fourth. Blach allowed seven runs and seven hits in 3 1/3 innings.

"He's a guy who eats up innings. We had to stay with him," manager Bruce Bochy said.

Infielder Matt Beaty had a pinch-hit single in the eighth inning for the Dodgers in his major league debut. Beaty was recalled from Triple-A Oklahoma City before the game.

Dodgers: CF A.J. Pollock was placed on the injured list. He might need surgery because of an infection in his surgically repaired right elbow. The 31-year-old Pollock signed a $55 million, four-year contract with the Dodgers in the offseason but has struggled at the plate.

Giants ace Madison Bumgarner (1-4, 4.30 ERA) squares off against the Dodgers' Hyun-Jin Ryu (3-1, 2.96 ERA) in a matchup of left-handers in the series finale Wednesday. Coming off a season-high 10 strikeouts against Pittsburgh in his most recent outing, Ryu beat San Francisco earlier this year when he allowed two runs over seven innings. The Giants have lost five of the six games that Bumgarner has started.