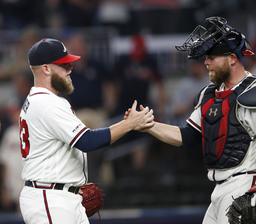 ATLANTA (AP) Max Fried has emerged as a force in Atlanta's rotation, in part because he doesn't issue many walks.

Fried (4-1) allowed four hits with no walks in his longest career start and lowered his ERA to 2.11. He had seven strikeouts and recovered after giving up a fourth-inning homer to Manny Machado.

It was the third start - and second straight - without a walk for Fried this season. Braves starters have walked at least one batter in every other game.

"The game plan was to try to throw strikes with all my pitches and really just be on the attack," Fried said.

Fried acknowledged he was "a little juiced up" in his first career start against San Diego, the team that made him the No. 7 overall pick in the 2012 draft. The left-hander was traded to Atlanta as part of the 2014 deal that sent outfielder Justin Upton to San Diego.

"He's fun to watch," said Charlie Culberson, who singled and scored in Atlanta's three-run seventh. "You see him and he's so easy. His mechanics are smooth."

The Braves led 2-1 before scoring three runs in the seventh off Luis Perdomo. Ronald Acuna Jr. drove in Culberson from third base with a pinch-hit infield single as catcher Francisco Mejia dropped Machado's throw when shifting to make the tag. Swanson followed with a two-run homer.

The Padres loaded the bases against Jacob Webb with no outs in the eighth but couldn't score. Tomlin fielded Franmil Reyes' weak grounder on the mound and threw to the plate to force Ian Kinsler for the first out. Tomlin then struck out Machado and Hunter Renfroe.

"There's no situation that fazes him," Braves manager Brian Snitker said of Tomlin. "If they hit him, they hit him, but he's going to get it over."

Quantrill (0-1) overcame a shaky first inning to give up two runs on six hits and one walk in 5 2/3 innings. The son of former major league pitcher Paul Quantrill and a 2016 first-round draft pick, Quantrill was called up from Triple-A El Paso before the game.

Atlanta's first three batters against Quantrill hit the ball hard. Ozzie Albies hit a triple to right field and scored on Swanson's long fly ball. Freddie Freeman added an opposite-field double past Renfroe in left field but was stranded on second base.

Acuna had been 3 for 19 in the homestand and was rested before his pinch-hit single. He stayed in the game.

Left-hander A.J. Minter, whose recent struggles threatened to cost him the closer's job, pitched a perfect ninth in a non-save situation.

Padres: RHP Phil Maton was optioned to Triple-A El Paso and RHP Miguel Diaz (torn meniscus) was transferred to the 60-day injured list to clear a roster spot for Quantrill.

Braves: 3B Josh Donaldson was held out for the second straight day with right calf soreness. Snitker said Donaldson was better and "hopefully" will start on Thursday. ... CF Ender Inciarte (tightness in right hamstring) started after being limited to pinch-hitting on Tuesday night.

Swanson's 25 RBIs lead the Braves. He also matched Albies and Acuna for the team lead with his sixth homer.