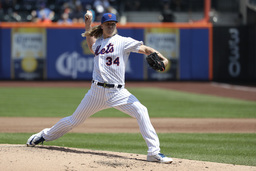 NEW YORK (AP) This may have been Thor's most dominant bolt of brilliance yet.

Noah Syndergaard became the first pitcher in 36 years to homer and throw a complete game in a 1-0 victory, lifting the New York Mets over the Cincinnati Reds on Thursday.

Syndergaard (2-3) struck out 10 and allowed four hits in his second career shutout, shaking off a sloppy start to the season with a do-it-all effort. He became the first Mets starter to get an out in the eighth this year and the franchise's first starter ever to go yard in a 1-0 complete game.

Thor did his hammering in the third inning, driving a ball 407 feet to the opposite field off Tyler Mahle (0-4).

"I got that one pretty good," the left-handed hitter said with a smile.

"It looked like a righty hit it," manager Mickey Callaway said. "A power-hitting righty."

The previous pitcher to homer in a 1-0 complete game was the Los Angeles Dodgers' Bob Welch against the Reds on June 17, 1983, according to the Elias Sports Bureau.

Syndergaard, a hard-throwing All-Star in 2016, entered with a 6.35 ERA this season. His velocity picked up a tick from where he'd been, topping out at 99.5 mph on his final pitch to freeze Yasiel Puig.

The right-hander had said chilly temperatures were making it difficult to grip the ball in previous starts. Working under sunny skies for a rare noon start, Thor busted out thunder and lightning in broad daylight.

"It was nice to be able to pitch in some nice weather," Syndergaard said.

Syndergaard's second homer this season was the sixth of his career, tying Tom Seaver for second among Mets pitchers, one behind Dwight Gooden's team record.

New York entered with three homers from its pitching staff - including one each from Jacob deGrom and Wheeler - which was tied with Arizona for the major league lead. The Mets' four homers matched the franchise season record set in 2016.

"They love to hit," Callaway said. "There's times we'll let them swing away in big situations when other teams might have their pitchers bunt. Our pitchers can get it done, so you want to give them a chance. They take it more seriously than most."

Syndergaard's shot was the 11th homer by a pitcher in the majors this season, on pace to easily surpass the 34 such drives in 2003 for the most since the introduction of the designated hitter in 1973. That comes as momentum has built recently to bring the DH to the NL.

"Am I a fan of the DH? I'm really not," Syndergaard said. "Really both sides. I like hitting. It's fun. It keeps me relaxed out there pitching. On the other side, a lot of other opposing pitchers don't really know how to swing the bat that well, so I just see it as an opportunity to get a couple extra strikeouts."

The game breezed by in 2 hours, 10 minutes, the fastest Mets game this season by over 30 minutes.

Reds leadoff hitter Jesse Winker got an earful from Mets fans after waving tauntingly at the Citi Field faithful following a pair of victories earlier in the series. Winker was booed prior to his first at-bat and waved at sarcastically by fans after striking out in the first and sixth.

Jeers peaked in the ninth, when Winker was ejected arguing balls and strikes with plate umpire Marty Foster. Kyle Farmer replaced Winker and struck out looking, with the punchout going on Winker's record.

"That's baseball," Winker said of all the heckling. "We're playing on the road. Fans always get on you. It's part of the game. It's fun. It's fan interaction. I think that's what the game wants."

Mahle delivered five solid innings, with the only damage coming on Syndergaard's strike. Mahle struck out seven with four hits and no walks.

The Reds entered with 99 runs allowed this season, tied with AL East-leading Tampa Bay for best in baseball. They allowed one run over the final 18 innings of the series.

"We knew he's a good hitter," Mahle said of Syndergaard. "And I just tried to throw a fastball away, figured to get ahead, and it wasn't a very competitive pitch and he made me pay for it."

Reds: 1B Joey Votto was out of the lineup for rest but entered as a pinch hitter.

Mets: C Wilson Ramos took Winker's foul tip off his right knee in the third. He crumpled in pain and was visited by a trainer but remained in the game. ... 1B Pete Alonso was held out of the lineup to rest but pinch hit for Dominic Smith in the sixth.