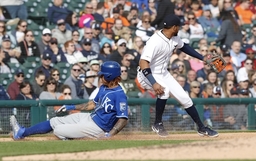 DETROIT (AP) In eight games with the Kansas City Royals, Kelvin Gutierrez has already made a nice impression.

Gutierrez had four hits and a stolen base Saturday, and the Royals routed the Detroit Tigers 15-3. Kansas City scored four runs in the first inning and six in the eighth. Alex Gordon homered and drove in five runs.

Gutierrez, acquired from Washington last year in a trade for namesake Kelvin Herrera, made his big league debut April 27. This was his third multihit game, but his first with more than two.

"I feel great because the team gives me an opportunity and I play great," Gutierrez said. "It felt great."

Whit Merrifield also homered for the Royals, and Jeimer Candelario and Ronny Rodriguez went deep for the Tigers.

Ross was making his first start since returning from the paternity list. He and his wife Ashley welcomed their first child, Jordan Anthony Ross, on Wednesday.

His outing Saturday was a forgettable one. He allowed six hits in the first inning, including Gordon's two-run homer that opened the scoring and an RBI double by Jorge Soler. Ryan O'Hearn added a run-scoring single to make it 4-0.

Adalberto Mondesi hit an RBI triple in the second, and Ross was done after a one-out walk by Hunter Dozier.

"It's been a while since I've been on the bump," said Ross, whose previous outing was April 24. "It's a little bit of a bump in the road here, but I'm looking forward to getting back to work and getting back to my rhythm."

Reliever Reed Garrett didn't fare any better, allowing an RBI double to Gutierrez in the third, and then three walks. His last walk forced in a run to make it 7-0, and Garrett was pulled, too.

Candelario hit a two-run homer in the bottom of the third, but Merrifield's solo shot in the fifth made it 8-2, and Gordon added a sacrifice fly that inning.

Drew VerHagen came on for Detroit in the eighth and allowed six more runs. He allowed three walks and five hits, including a two-run single by Gordon . VerHagen was designated for assignment after the game.

"Maybe a change of scenery might do him good," Tigers manager Ron Gardenhire said.

Rodriguez hit a solo homer in the bottom of the eighth.

Candelario tossed his bat like he thought he'd drawn ball four in the third, but the pitch was called as strike and he stayed at the plate. Swinging turned out to be the better move. He ended up homering in that plate appearance.

"I think up and down the lineup, you just have to look at it personally," Gordon said. "Just never giving at-bats away, no matter what the score is."

Tigers: OF Christin Stewart (right quad) began a rehab assignment with Class A Lakeland on Friday night and went 3 for 5 with a homer.

Royals: Brad Keller (2-3) takes the mound Sunday in the rubber match of this three-game series.

Tigers: Spencer Turnbull (2-2) pitches for Detroit. He has allowed one earned run over his past three starts.