Boyd gets Tigers started in 3-0 shutout of skidding Orioles 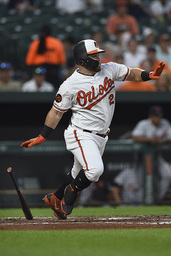 BALTIMORE (AP) For the first time in weeks, the Detroit Tigers played the game of baseball the way it's supposed to be performed.

They pitched well. They didn't make an error. Not only that, but the Tigers even added a notch to their AL-low home run total.

JaCoby Jones had two doubles and an RBI for the Tigers, who won for only the second time in 14 games since May 12.

"Winning is everything. That's all anyone in here cares about," catcher Grayson Greiner said. "It's been a rough stretch. I don't know how many games in a row that I've caught that we lost. It felt really good to get a win."

Boyd (5-4) struck out eight and allowed six hits in six-plus innings . The lefty permitted only two runners to reach second base until he gave up a walk and a single to open the seventh.

That ended his night with Detroit leading 3-0. Buck Farmer and Daniel Stumpf kept the runners in place, Joe Jimenez needed 31 pitches to get out of the eighth and Shane Greene got three straight outs for his 17th save in 18 tries.

"I kind of beat myself at the end, and they did their job," Boyd said. "Buck and Stumpf did a great job of picking me up that inning."

It was Detroit's second shutout of the season, and the fourth time Baltimore has been blanked.

Boyd and the Detroit bullpen outpitched Orioles starter Dylan Bundy (2-6), who gave up three runs and seven hits. He struck out eight, the last one giving him 500 for his career.

"I found out about that after the game," Bundy said of No. 500. "That's pretty neat. Definitely a ball I can hold onto and a start that I can keep building on."

Recalled from Triple-A Norfolk earlier in the day, DJ Stewart had three hits and a stolen base for Baltimore.

Detroit went up 1-0 in the first inning when Miguel Cabrera singled in a run , his 69th RBI in 70 career games against Baltimore.

Jones hit a run-scoring double in the second, and Goodrum made it 3-0 in the fifth with his first home run in 23 games since April 30.

Tigers: RHP Spencer Turnbull was placed on the bereavement list and replaced by INF Jeimer Candelario, who was recalled from Triple-A Toledo. The Tigers also signed RHP Carlos Torres to a minor league contract and assigned him to Toledo. The 36-year-old Torres has 358 major league appearances, most recently with Washington last year.

Orioles: Stewart was summoned from Norfolk after batting .456 with five homers in May. The 25th overall pick in the 2015 draft, Stewart made his major league debut last year, hitting .250 with three homers in 17 games with Baltimore.

Tigers: INF Josh Harrison (left hamstring tendon strain) was placed on the 10-day injured list. Harrison is hitting .176 with a homer and eight RBIs in his first season with the Tigers. Detroit recalled OF Victor Reyes from Toledo, where he was hitting .242 with four homers and 30 RBIs. ... SS Jordy Mercer (right quad strain) went 1 for 2 with Toledo in his fourth rehab game, leaving after three innings after feeling tightness in his quad. "This is definitely a setback," manager Ron Gardenhire said. "Hopefully it's nothing serious and just fatigue."

Tigers: LHP Ryan Carpenter (0-2, 9.00 ERA) makes his fourth start of season Wednesday night, still in search of his second career win. It will be his first appearance against Baltimore.

Orioles: LHP John Means (5-4, 2.96) has allowed three runs over five innings in each of his last two outings after giving up a total of two runs in his previous two starts.