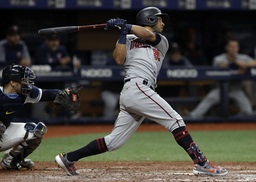 ST. PETERSBURG, Fla. (AP) The Minnesota Twins are a hit - and getting hit.

Eddie Rosario hit a tiebreaking two-run single off Adam Kolarek in the ninth inning after a pair of batters were hit by pitches, and the Twins beat the Tampa Bay Rays 5-3 Friday night in a matchup of two of the major leagues' hottest teams.

"We don't want our guys getting nicked up or anything, but sometimes you take the baserunners any way you can," Twins manager Rocco Baldelli said. "And sometimes it takes a base hit with men on base to kind of wake everyone up and get things going."

Jose Berrios and Taylor Rogers (2-1) combined on a four-hitter and stopped a six-game winning streak by the Rays (35-20), their longest since last August. Tampa Bay won the series opener 14-3 and had allowed three runs or fewer in its previous nine games.

"It's something we've seen this year. In the games that we have not played our best or lost, we've come back the day after and really pulled together and played good baseball," Baldelli said. "It's what we've come to expect. I think we have the type of guys that regardless of what happens today, they'll be ready to play tomorrow."

The Twins have scored three or more runs in 24 straight games, matching the Minnesota record for a single season, set in 2006. They trailed 3-1 in the fifth before Polanco drove in a run with his second double and scored on a single by Willians Astudillo.

Diego Castillo (1-4) hit Jonathan Schoop on the left shoulder with a slider leading off the ninth. Schoop was sacrificed to second and took third on a groundout. Polanco was intentionally walked, and Castillo plunked Astudillo on the left arm with a slider on a 1-2 count.

Kolarek, a left-hander, relieved to face the left-handed hitting Rosario, and Rosario grounded an opposite-field single to left, past the spot vacated when third baseman Christian Arroyo shifted toward shortstop.

Astudillo had an RBI single in the first, but Kevin Kiermaier's two-run homer in the second put the Rays ahead. Austin Meadows stole home in the third when with runners at the corners and two outs, Willy Adames got caught in a rundown while Meadows dashed home. The throw from Schoop at second was in the dirt and got away from Astudillo at the plate.

Astudillo was thrown out at the plate by Kiermaier while trying to score on C.J. Cron's two-out double to center.

Rays pitcher Emilio Pagan was hit on the right cheek by a line drive off Schoop's bat in the sixth but remained in the game.

"I was lucky," Pagan said. "Probably my No. 1 fear, most pitchers will agree, that a ball coming back at you is not a fun situation to be in. It could have gotten me on my hand a lot more serious, and it definitely could have hit me in the face a lot harder."

Twins: Polanco was at DH after missing Thursday's game due to illness.