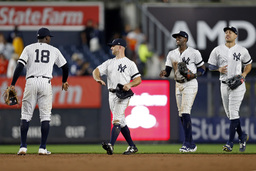 NEW YORK (AP) Fresh off a power-packed win, the New York Yankees' clubhouse was pumpin' and thumpin'. Until some mysterious DJ suddenly turned down the volume.

"Who's touching that music over there?" Aaron Judge called out, playfully.

Suffice to say, the bats are about to get a lot louder in the Bronx.

Gary Sanchez, Gleyber Torres and DJ LeMahieu homered in a hurry, connecting in a six-run fourth inning that powered the Yankees past the Houston Astros 10-6 Thursday night for their sixth straight win.

Edwin Encarnacion hit his AL-leading 23rd home run as the Yankees handed Houston its season-worst fifth loss in a row, matching its longest skid since 2016.

Cheering the victory was Judge, set to come off the injured list for Friday night's game. Out since April 20 with a strained left oblique, the All-Star slugger will join a potent Yankees lineup that thundered on a stormy evening.

"It's going to be scary," Yankees pitcher Chad Green said.

Sanchez opened the fourth with his 22nd homer. With rain falling, Torres connected for a three-run jolt off rookie Framber Valdez (3-3).

LeMahieu tagged reliever Chris Devenski for a two-run homer and a 6-0 lead.

"You saw it again tonight," Yankees manager Aaron Boone said. "As a group, they just make it really tough."

The big inning included two delays - a short break to fix the mound and a 37-minute stoppage when the showers fell too hard.

Judge was in the dugout during the first interlude and pounding his hand to the fan chants of "Let's go, Yankees!" From across the diamond, he tipped his cap toward Bregman, two young stars acknowledging each other.

Encarnacion homered for the second time since being traded from Seattle to New York last weekend, and Giancarlo Stanton got three hits as New York opened a 10-3 lead.

"They're dangerous whenever they get into these hitter's counts and it started from the very first hitter of the blowup inning," Astros manager AJ Hinch said. "They showed how explosive they are. We couldn't keep the ball in the ballpark and the game kind of got away from us for a little bit."

Cameron Maybin added a two-run double, scored twice and made a sliding catch for the Yankees, doing damage against the team he helped win the 2017 World Series. He almost made a circus catch at the wall in left to end the game, only to have Alvarez's fly elude him for an RBI double.

Aroldis Chapman got the final out with two on for his 20th save in 22 chances.

Nestor Cortes Jr. (2-0) pitched three innings in relief, and was optioned to Triple-A after the game to make room for Judge.

Astros sparkplug Jose Altuve singled for his first hit in eight at-bats since a five-week stay on the injured list because of a strained hamstring.

The Yankees homered in their 23rd straight game, two shy of the franchise record set in 1941. ... This was the first time the Yankees have hit at least four home runs and allowed at least four in a game since July 15, 2012, against the Angels.

Astros: OF George Springer (strained left hamstring) hit two home runs for Double-A Corpus Christi in his first rehab game. If all goes well, he could rejoin Houston next week. ... RHP Collin McHugh (elbow) is expected to pitch twice this week in Double-A.

Yankees: LHP Jordan Montgomery has inflammation in his left shoulder and won't pitch for two weeks. He is recovering from Tommy John surgery, but recently had to stop a bullpen session and it's uncertain if he'll pitch this season.

Yankees: LHP James Paxton (4-3, 3.93) gave up two homers to Altuve and was hit hard in a loss at Houston on April 10 as the Yankees were swept in a three-game set.