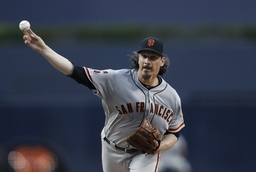 It gave the bullpen a nice rest, and the big right-hander always expects to go as deep as possible.

"It feels good when you're used to that," said Samardzija, who scattered five hits and had a double among the Giants' nine extra-base hits.

He was backed by home runs from Kevin Pillar, Evan Longoria and Austin Slater.

"You've got to get that threshold up as a starter to where that feels normal to be throwing seven, eight, nine innings. Anything other than that is not necessarily a letdown depending on how the day went, but it's just what you're out there for and you should expect yourself to be good enough to do that," Samardzija said.

"You have a good sinker that day, throwing off speed for strikes, you're going to have a good day," he added. "When you're pitching that late in the game it's house money and it always feels good to keep running out there."

The Giants, who beat Arizona 10-4 on Sunday, are coming to the end of a stretch of 20 straight games.

Samardzija "was a big story tonight because we had a lot of guys down there we're trying to give an extra day's rest," manager Bruce Bochy said. "He did that and more; eight solid innings, that was huge. Good stuff, good movement. What a great job he did."

Padres rookie left-hander Logan Allen cruised through three innings before the Giants started hitting him hard. Longoria had an RBI double and Slater an RBI triple in the fourth.

Samardzija doubled to left field leading off the fifth and scored on Tyler Austin's two-run double with the bases loaded. Buster Posey followed with an RBI double to chase Allen.

Phil Maton came on and retired the side, but allowed Brandon Belt's RBI single in the sixth and then Longoria's leadoff homer in the seventh and Slater's solo shot with one out. It was Longoria's eighth and Slater's first.

Pillar's three-run homer off Robert Stock highlighted the four-run eighth. It was his 12th.

Allen (2-1) was trying for his third straight win. He gave up six runs and seven hits in four-plus innings.

"I made some good pitches but big league hitters do what they should against missed pitches," Allen said. "I missed a few pitches here and there. I still feel like I competed my butt off, but results weren't there. I let off the gas pedal a little bit to try to find the heater on the inner half.

"It's a good thing this happened," he added. "I'm not happy it happened, but you learn the most from situations like this, as does everybody in the clubhouse when they have a bad day. I move on, I figure out what was working, what doesn't. Five days from now it won't happen again."

Padres rookie SS Fernando Tatis Jr. again showed his speed when he tripled leading off the sixth and then scored on Manny Machado's popup to second baseman Joe Panik in shallow right. Tatis also had some nice defensive plays.

"He's a heck of a player, man," Samardzija said. "He's young, so you've got to understand he's going to be aggressive and try to make things happen. He can hit. It's just a matter of keeping him off the bases because his speed creates problems."

Said Bochy: "He's having quite the year for a rookie. He's all that's been advertised, probably even more. He's got everything: defense, runs well, good hitter, hits with power. They've got a nice young player there."

Padres: RHP Dinelson Lamet threw a bullpen and could make a start during a four-game series at the Los Angeles Dodgers that begins Thursday night. He's been sidelined after having Tommy John surgery in April 2018.

Giants: RHP Tyler Beede (1-3, 6.45 ERA) is scheduled to pitch Tuesday night. The Giants are 5-2 in his starts this year, winning three of his last four.