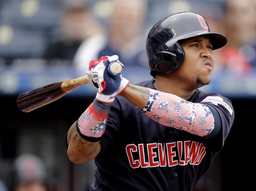 It wasn't long until Cleveland took advantage of it.

Francisco Lindor drove in the go-ahead runs during a six-run seventh inning, Jose Ramirez homered twice and Carlos Santana pushed his on-base streak to 27 games as the Indians rallied to beat bumbling Kansas City 8-4 on Thursday and complete a three-game sweep.

Tyler Naquin and Jason Kipnis also drove in runs for the suddenly red-hot Indians, who beat the Royals - losers of four straight and seven of eight - for the fifth time in six meetings.

"They were just letting us hang around and hang around," Francona sad, "and all of a sudden some good things happen, and we have a big inning and it snowballs from there."

Kansas City only managed three more hits in a game delayed 2 1/2 hours at the start by rain.

"Cimber threw 30 pitches," Francona said, "but I didn't see any reason to take him out."

Still, the Royals were clinging to a 3-2 lead in the seventh when Jorge Lopez (1-7) coughed up hits to the only four batters he faced. Kevin Plawecki and Bobby Bradley started the inning with singles, and Naquin doubled home Plawecki before Lindor laced a two-run single to give Cleveland the lead.

Lindor later scored as the Indians proceeded to score six times in the inning.

"I've got no excuse," Lopez said. "I fell behind to the first guy. Threw a right-down-the-middle curveball. The next guy, tried to look for a ground ball, like I always try to get. Unfortunately, I didn't have it. They found the holes and they kept going."

The Royals' meltdown wasted another solid start by Homer Bailey, who allowed two runs and six hits in five-plus innings. Bailey still has not lost a game since June 1.

"It's not just Lopez," Royals manager Ned Yost said of his bullpen. "They'll have good outings then a not-good outing. We were trying to put it all together in our minds."

Plesac faced the minimum through the first two innings, but he appeared to struggle with his grip when a muggy afternoon followed all the rain. At one point, Francona and a trainer came out with a towel so that Plesac could dry off his hands and arms.

It didn't seem to do much for his ability to throw strikes.

Cam Gallagher singled in the third, Terrence Gore walked and Whit Merrifield singled before Adalberto Mondesi laid down a squeeze bunt that the fleet-footed shortstop turned into an RBI base hit.

Hunter Dozier walked later in the inning, and Jorge Soler's bases-loaded walk gave the Royals a 3-1 lead and brought Francona to the mound again - this time to summon a reliever.

A.J. Cole and Tyler Clippard joined Cimber in keeping the Indians in the game, and their offense got them within a run in the fifth. Two innings later, that offense gave them the lead for good.

The Indians have had five sweeps of at least three games this season. Three have come in their past six series. ... Cleveland scored 21 runs on 33 hits during the series. ... The Royals have led in 60 of 88 games but have blown a league-leading 30 of them. ... Gallagher homered in the ninth.

Yost acknowledged catcher Salvador Perez (Tommy John surgery) is making progress in his recovery, and that "he's itching to start catching sides." Perez had surgery in spring training and is aiming to be back next spring. "There's no throwing involved. He can't," Yost said."

Yost wasn't surprised Soler was snubbed for next week's All-Star Home Run Derby, despite having hit 23 this season. "You know that old saying, `Where there's smoke, there's fire?'" Yost asked. "I couldn't smell no smoke. I wasn't surprised. I thought he'd be a great pick for it, though."

The Royals wrap up their pre-All-Star break slate with three games in Washington starting Friday night, when RHP Brad Keller (4-9, 4.63 ERA) takes the mound. The Indians have Friday off before closing the first half with a pair of games in Cincinnati this weekend.