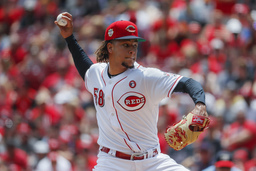 CINCINNATI (AP) Luis Castillo tuned up for his first All-Star Game with an absolute gem.

Castillo struck out nine while pitching one-hit ball into the eighth inning, and the Cincinnati Reds beat the slumping Milwaukee Brewers 1-0 on Thursday.

"This was the best outing, not only of the season, but of my career," Castillo said.

Cincinnati won for the fourth time in five games. Jesse Winker went 3 for 3 and scored the only run on Yasiel Puig's first-inning single.

Castillo was winless in three previous starts against Milwaukee this year, but he was terrific this time around. He was working on a no-hitter before rookie Keston Hiura singled with one out in the seventh.

"They hit me well a couple times when I faced them," Castillo said. "I made some adjustments in the bullpen and in the game. I watched the video or the last two outings and started to pitch backward - the opposite way I worked in my last two outings."

Castillo (8-3), who pitched seven sparkling innings in a 1-0 loss to Milwaukee on April 3, might have gone the distance if not for a 69-minute rain delay with two out in the eighth inning.

"In his last two starts, we did a great job laying off things," Milwaukee manager Craig Counsell said. "His command in those starts wasn't as good. The batters had good plans, but he did a good job keeping hitters guessing. He threw more strikes."

Milwaukee dropped the last three games of the four-game set. It hasn't scored in the last 23 innings.

"I don't know what to say about our pitching," Reds manager David Bell said. "They are doing everything they can. To limit the scoring like they did in the last three games of the series shows so much about their preparation and hard work. They continue to develop as a staff."

Christian Yelich started the ninth with a double off Raisel Iglesias for the Brewers' second hit. But Iglesias then retired three in a row for his 16th save, helped by left fielder Phillip Ervin's tumbling catch against the wall on Mike Moustakas' foul ball.

Milwaukee wasted a solid start by Brandon Woodruff (10-3), who permitted seven hits, struck out six and walked none in six innings.

Winker led off the first with a double to right. After Joey Votto singled, Puig singled up the third-base line to give Cincinnati the lead.

Cincinnati leads the majors with 71 runs in the first inning this season.

Cincinnati recalled infielder/outfielder Josh VanMeter from Triple-A Louisville to replace reliever Amir Garrett, who was placed on the 10-day injured list with a strained muscle in his back. The promotion was VanMeter's third of the season.

Brewers: OF Ryan Braun did not start after getting hit by a pitch in the ninth inning of Wednesday's game. Braun also had a sore knee after sliding into the wall while catching a foul ball on Tuesday. "He's a little banged up," Counsell said.

Reds: LHP Alex Wood is scheduled to begin a rehab assignment with Triple-A Louisville on Saturday.

Brewers: RHP Zach Davies (7-2) pitches at Pittsburgh on Friday. He is 2-0 in three starts against the Pirates this season.

Reds: After a rare Friday off, the Reds open a two-game interleague series with Cleveland in Cincinnati on Saturday. RHP Anthony DeSclafani (5-4), who got a win against the Indians on June 12, is the Reds' scheduled starter.