Cano's two-run homer in the 8th lifts Mets past Marlins, 4-2 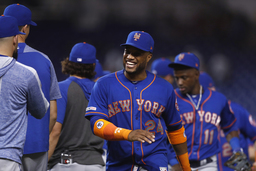 MIAMI (AP) Manager Mickey Callaway said before the Mets played Saturday night that he was not concerned with Robinson Cano's lack of power thus far.

"Because I knew he was going to hit a bomb tonight to win it," Callaway quipped. "You guys didn't realize that?"

Cano hit a tiebreaking, two-run homer in the eighth inning to lift New York to a 4-2 victory over the Miami Marlins.

"It meant a lot, not because I hit a homer, but because it helped to win a game," Cano said. "I know in that situation I haven't been that successful this year, but I'm a positive guy and the good thing about this game is you're always going to get the same situation over and over. You just have to stay positive and things are going to turn around."

Cano's fifth home run of the season sailed into the second deck in right field at Marlins Park, breaking a 2-all tie.

It came after Dominic Smith hit a one-out single against Nick Anderson (2-4). Cano delivered his first home run since June 17 at Atlanta, ending a drought of 71 at-bats without a homer.

"He needed it," Callaway said. "Obviously we have talked about his struggles on the road and to get a go-ahead home run has to make him feel good about himself tonight. He's been working hard."

Cano noted why he thinks his power numbers have not been on display this season like they have throughout his career, with 316 homers to his credit over 15 seasons.

"I don't know if you've noticed, but I've been hit twice in the hand this year and that's not an excuse," Cano said. "Even if it's bothering me I would never say anything. I always like to go out and be able to contribute any way, any how. I would never use an excuse like that, but right now my hand feels really good."

Noah Syndergaard (7-4) won his fourth consecutive decision. He pitched seven innings, allowing two runs and five hits. He struck out nine without walking a batter and retired the final 11 batters he faced.

"I felt I did a really good job of being able to repeat my delivery," Syndergaard said. "I really pounded my sinker into righties and my slider started to come back so it kind of opened up both sides of the plate."

Seth Lugo pitched a perfect eighth and Edwin Diaz worked around a one-out single in the ninth for his 20th save in 24 opportunities.

Michael Conforto hit a two-run homer to right field to give the Mets the early lead off Zac Gallen. It was Conforto's 17th home run of the season.

The Marlins tied the game at 2 in the fourth on a double by Harold Ramirez and a triple to the right-field corner by Jorge Alfaro.

Syndergaard has dealt with his name being discussed in trade rumors in the past and it could happen again this year with the Mets entering Saturday 14 1/2 games out of first place in their division.

"I try not to pay too much attention to that," he said. "Right now I love being a Met. If something were to ever change, then it would be bittersweet because of New York itself, the fan base, and just the guys in this clubhouse have a special place in my heart."

Syndergaard is 44-26 in five seasons with the Mets.

Conforto batted second in the lineup for just the sixth time this season with Pete Alonso batting third.

"You just get the feeling you're going to get more pitches in the zone with a guy with 30 homers behind you," Conforto said.

Mets: C Wilson Ramos, who collided with Starlin Castro in the eighth inning of Friday's game, did not play. "He just caught a spike in the knee, but he didn't twist his knee or anything, he's fine," Callaway said after Friday's game.