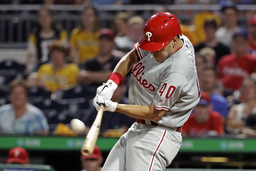 PITTSBURGH (AP) Although Bryce Harper had the tiebreaking RBI single in the seventh inning, it was Jean Segura's lengthy at-bat in the following inning to drive in an insurance run that was the talk of the Philadelphia Phillies' clubhouse.

Segura came to the plate with two outs and the bases loaded and forced Pittsburgh reliever Kyle Crick to throw 13 pitches before he hit a slow roller to the right of first baseman Josh Bell. Segura, playing through a banged-up left heel suffered when he fouled a ball off his foot on Monday, gutted it out and beat a covering Crick to the base by a fraction of a second.

That gave the Phillies a two-run lead and they added three more in the ninth on a night they finished with 15 hits in a 6-1 victory over the Pirates on Friday night.

"Segura just grinded and grinded and grided and then the hustle was off the charts," Philadelphia manager Gabe Kapler said. "He broke right out of the box, never hesitated, smiled a hit, gave us everything he had and beat it out. It was a huge play in the game."

The Phillies won back-to-back games for the first time since July 2, and did it with important late-game contributions in both.

"It's just incredible, the way we grinded, especially from the seventh inning on," starting pitcher Jake Arrieta said.

Harper's single off Pirates reliever Richard Rodriguez (3-4) in the seventh scored pinch-hitter Brad Miller to give the Phillies their first lead of the game.

Miller reached on a single to left and advanced on a walk and fielder's choice to set the table for Harper, who finished 2 for 5 with a double.

The run snapped a 19-game scoreless streak for Rodriguez.

Rookie outfielder Adam Haseley added a solo homer, his second in two games, and a run-scoring double to cap it for the Phillies.

In the ninth, Maikel Franco drove in J.T. Realmuto with another infield single, Cesar Hernandez scored on a wild pitch and Haseley plated Franco with a double.

The rally made a winner of Juan Nicasio (2-3), who pitched one-third of an inning in relief of starter Arrieta.

Arrieta worked 5 2/3 innings of one-run ball. He struck out four and allowed six hits. He's been dealing with a bone spur in his elbow but has allowed two runs over 10 2/3 innings in his last two starts.

"I'm going to do what I can to continue to help us win," he said.

Cole Irvin pitched two innings for his first save.

Pirates starter Jordan Lyles bounced back from his worst start of the season, striking out seven in 5 2/3 innings while allowing one run. In his previous start, he gave up seven runs and didn't get out of the first inning.

"It had been a tough stretch," Pirates manager Clint Hurdle said. "I was really pleased and proud of his effort, and the work he's continued to do."

Pirates: RHP Trevor Williams had his scheduled start on Saturday scratched due to severe flu-like symptoms. ... RHP Keone Kela (right shoulder inflammation) is expected to wrap up his rehab assignment with Triple-A Indianapolis this weekend.

The Phillies agreed to a deal with LHP Drew Smyly, who will be put into the starting rotation on Sunday, pending completion of a physical. Smyly was 1-5 with an 8.42 ERA in 13 games with the Texas Rangers earlier this season. He will take the place of Jake Pivetta, who was moved to the bullpen.

Phillies: RHP Zach Eflin (7-9, 4.16 ERA) has allowed 13 earned runs over his last two starts and has dropped four of his last five decisions.

Pirates: RHP Joe Musgrove (6-8, 4.31) will have his scheduled start moved up a day to fill in for Williams.