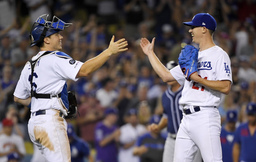 LOS ANGELES (AP) Walker Buehler learned about efficiency when the Los Angeles Dodgers kept a close watch on his pitch count during his rookie season.

Those lessons are paying off this year.

Buehler struck out 15 in his second career complete game, and the Dodgers beat the San Diego Padres 4-1 on Saturday night.

Allowed over 94 pitches just once in his first nine starts in 2018, Buehler said he still envisioned pushing toward complete games. The knowledge he gained from those experiences has helped him throw two complete games over his last seven starts in an era when going the distance is rare.

"It just signifies me being efficient and doing my job on pitch count, and things like that," Buehler said. "I kind of learned how to do that when I was on pitch count here early in my career. Having 75 or 85 pitches and wanting to get (deep) into games kind teaches you that stuff. People want to talk about pitch counts, but when you get restricted a little bit, I think you can learn stuff."

Buehler's 15 strikeouts were his most since he had 16 in a complete-game victory over Colorado on June 21. Buehler has not walked a batter in any of his double-digit strikeout games this season.

"He was getting ahead all night long and he had his way with a good lineup over there," Dodgers manager Dave Roberts said.

The NL West leaders grabbed control with three runs in the fifth inning, helped by some shaky Padres defense. Matt Beaty drove in Will Smith when Greg Garcia bobbled his grounder to second, preventing a potential double play.

Buehler followed with a sacrifice bunt that first baseman Eric Hosmer threw into center field. Max Muncy added a two-out RBI single, and Turner made it 4-0 with a bloop single.

Turner also hit his 17th homer in the fourth against Cal Quantrill. It was the first home run allowed by Quantrill over his last three starts.

"I thought Cal pitched really well and in many senses, matched (Buehler) there early on all the way through," Padres manager Andy Green said. "The defense kind of let him down. We had a couple of key plays behind him that we could have made and you look up and it's a 1-0 game. If you're making those plays it's a different ballgame with different pressure and different kinds of stress."

Quantrill was not about to take the shaky defense to task.

"In the end, I love them playing aggressively," Quantrill said. "In the end, they've saved me so many more runs than they'll ever cost me that I have absolutely zero complaints."

Buehler struck out the side in the first inning and barely let up from there. He gave up five hits and finished with 110 pitches.

He was working on a shutout before Manuel Margot connected for his first career pinch-hit homer with two outs in the eighth inning. It was Margot's seventh homer of the season.

"Getting late into the game like that I think (a shutout) crosses your mind," Buehler said. "I think Margot hit the worst pitch I threw all night and he did a good job with it so hats off to him, but we're happy to get the win."

Quantrill (4-3) gave up four runs and six hits over five innings. It was the rookie right-hander's first loss since his third career start May 19.

"I felt great," Quantrill said. "Minus a couple pitches here and there, that's about as good as I can throw a baseball. There were some times I needed to step up and get an out, and I didn't, and I'll continue to work on that. But overall, I feel like I'm in a good place."

Padres: LF Josh Naylor fouled a ball off his left knee in the second inning. He remained in the game, although he was sore. Green said the club will re-evaluate Naylor before Sunday's series finale.

Dodgers: RHP Ross Stripling (neck, biceps soreness) threw a 25-pitch bullpen session that was pain free and will pitch in a minor league rehab game Tuesday. ... OF A.J. Pollock tested his sore groin with a regular batting practice session and is expected to be back in the starting lineup Sunday or Monday. ... INF Jedd Gyorko, obtained from the St. Louis Cardinals at the trade deadline, started a minor league rehab stint with Double-A Tulsa on Saturday as he gets closer to returning from a right wrist injury.

Padres: Rookie right-hander Chris Paddock (7-5) is set to make his third start at Dodger Stadium on Sunday, his most at any visiting park.

Dodgers: Right-hander Kenta Maeda (7-8) will make his fourth start of the season against the Padres, coming off back-to-back outings where he gave up eight earned runs, the most he has given up in consecutive starts this year.