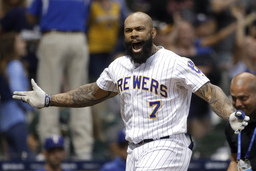 One swing later, it was over.

Thames hit a game-ending homer to lift the Milwaukee Brewers to a 6-5 victory over the Texas Rangers on Friday night after Josh Hader blew a save opportunity for the fourth time this season.

"We're just happy to not have to go extras," Thames said. "We have two more games (in the series) so we need our arms in the bullpen. We can't waste everyone in one night."

Milwaukee earned its fourth straight win and moved within 2 1/2 games of NL Central-leading Chicago, which lost 5-2 at Cincinnati.

Milwaukee opened a 5-2 lead with three runs in the seventh, but Logan Forsythe hit a two-run homer off newly acquired reliever Jake Faria in the eighth and Elvis Andrus' solo shot off Hader tied it at 5 with one out in the ninth.

Enter Thames, who hit his 16th homer against Emmanuel Clase (0-1) with two out in the bottom half. Thames was mobbed by his teammates at the plate after ending a game that lasted more than 4 hours.

"Thames is a pretty good hitter," Texas manager Chris Woodward said. "He's good at shortening his swing and getting the barrel to the ball."

Hader (2-5) threw a season-high 44 pitches in 1 2/3 innings. The All-Star left-hander has allowed a home run in three of his last five appearances, but Thames said he isn't worried.

"Josh has a nasty fastball with life on it," Thames said. "If guys aren't sitting on that pitch, they're not going to hit it. Some guys get lucky and they connect. He's still the best pitcher I've seen in the big leagues. You can't strike everybody out."

Hunter Pence also homered for Texas, which has dropped three in a row. Kolby Allard, who was acquired last week in a trade with Atlanta, allowed two runs and three hits in 4 1/3 innings in his Rangers debut after he was called up from Triple-A Nashville.

Milwaukee jumped in front on Ryan Braun's two-out RBI double in the first, but Pence responded with a 449-foot drive off Gio Gonzalez in the fourth.

The Brewers had a 2-1 lead before the Rangers tied it again in the sixth. With the bases loaded after three consecutive two-out walks, Pence scampered home on Alex Claudio's wild pitch, but Rougned Odor was cut down at the plate trying to come home on the same play.

Milwaukee star Christian Yelich was held out for the third consecutive game due to nagging back soreness. The Brewers, who had Thursday off, had hoped the rest would allow the reigning NL MVP to play in the series opener.

"I think we've turned the corner a little bit," manager Craig Counsell said. "Optimistic on the weekend, but not 100 percent."

The Rangers optioned outfielder Scott Heineman to Triple-A Nashville to make room for Allard. They also traded left-hander Miguel Del Pozo, who has spent this season at Nashville, to the Los Angeles Angels for cash considerations.

Rangers: Isiah Kiner-Falefa and Willie Calhoun both remained in the game after being hit in the upper back by Hader fastballs.

Brewers: RHP Zach Davies, on the injured list with back soreness, is improving, Counsell said. "Our goal is to test him pretty hard a couple times," he said. "We don't want him pitching with some discomfort. I think that's hurt him in the past." ... RHP Brandon Woodruff (left oblique) played catch for the first time since going on the injured list last month.

The Brewers inducted former All-Star infielders J.J. Hardy and Rickie Weeks and Hall of Fame pitcher Trevor Hoffman into the Wall of Honor during a pregame ceremony.

"For the organization to think enough of us to be a part of this is fantastic," Hoffman said.

The Brewers and Rangers met for the first time since September 2016 in Arlington. Texas is making its third trip to Miller Park since it opened in 2001.

Counsell tied George Bamberger for the fourth-most wins by a Brewers manager. Only Phil Garner (563), Ned Yost (457) and Tom Trebelhorn (422) have more victories in franchise history.

Brewers: Adrian Houser (4-5, 4.24 ERA) will make his ninth start of the season and first of his career against the Rangers. Houser is 0-5 with a 6.82 ERA as a starter this season.