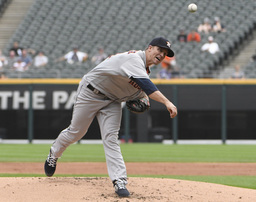 CHICAGO (AP) Zack Greinke was close to the form the Houston Astros hoped for when they traded for the right-hander to create an imposing rotation.

But he says he still needs to work on a few things.

Greinke tossed six solid innings in his second start with the Astros, George Springer and Jose Altuve hit solo home runs, and Houston topped the Chicago White Sox 6-2 in the first game of a doubleheader on Tuesday.

"My off-speed command was pretty good, but my fastball command is still a work in progress," Greinke said.

Greinke (12-4) allowed two runs on seven hits in winning for the second time since Houston acquired him from Arizona in a deal at the trade deadline. The 35-year-old struck out six, walked two and hit a batter in a 102-pitch outing that was sharper than his Astros debut last week when he allowed five runs in six innings to Colorado.

Greinke yielded a three-run homer with two outs in the sixth to Raimel Tapia against the Rockies last Tuesday. In this one, he kept the White Sox in the park - and mostly in check - as he was backed by solid defense.

"He was an out away from having two runs and six innings," manager A.J. Hinch said. "Very similar to this outing. He's just a really good pitcher who works his way through his outings, and he's winning."

Springer connected on the first pitch of the day as the AL West-leading Astros won for the ninth time in 10 games. He also threw out a runner at the plate from right field.

Springer said he was ready for an opening fastball from hard-throwing White Sox rookie Dylan Cease. He sent a 467-foot shot to the back of the left field stands.

Will Harris, Ryan Pressly and Collin McHugh each followed Greinke with a perfect inning.

Robinson Chirinos drove in two runs late with a pair of singles.

Eloy Jimenez and Jose Abreu drove in runs with doubles as Chicago came back to tie it from an early 2-0 deficit.

The Astros took the lead for good in the sixth when Yordan Alvarez scored an unearned run on the first of three passed balls charged to Welington Castillo.

"I'm going to talk to him after I talk to you guys," manager Rick Renteria told reporters.

Alvarez raced home from third to break a 2-all tie when Castillo couldn't handle Dylan Cease's shoulder high pitch to Aledmys Diaz. Castillo recovered the ball and threw to Cease covering the plate, but Alvarez narrowly beat the tag on a play that withstood video review.

Jake Marisnick scored from third in the seventh to make it 4-2 when Castillo failed to catch a high pitch to Alvarez.

"I didn't execute pitches that great, but we had a chance to win" Cease said.

Greinke allowed three singles in the second, but escaped unscathed when Springer threw out Castillo at the plate to end the inning.

Altuve led off the third with a line shot just over the left-center wall to give Houston a 2-0 lead.

Jimenez's double to the left-center gap in the fourth drove in Abreu from first to cut it to 2-1. Abreu's RBI double with two outs in the fifth tied it at 2.

With Houston ahead 4-2, Chirinos drove in insurance runs in the eighth and ninth.

Tuesday's straight doubleheader was scheduled after Monday night's game was postponed by rain.

Astros: INF Alex Bregman didn't start either game due to a sore shoulder suffered when he was hit by a pitch on Sunday. . RHP Brad Peacock (right shoulder discomfort) was in Houston's clubhouse following two rehab appearances for Triple-A Round Rock and said he felt "really good." Manager A.J. Hinch said Peacock will return to the minors for one or two more outings, starting on Thursday, before rejoining the Astros as a reliever. Peacock was 6-6 with a 4.13 ERA in 17 games (15 starts) before going on the IL on June 28. ... RHP Josh James (sore right shoulder) threw 20 pitches in Florida on Sunday. Hinch said the next step will be to intensify James' rehab program.

White Sox: INF/OF Leury Garcia (bruised finger on right hand) sat out the first game. ... Manager Rick Renteria said 3B Yoan Moncada (strained right hamstring) is progressing as he works out with the team, but there's no timetable for his return.