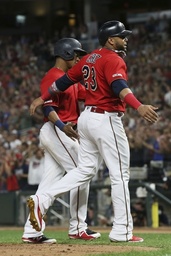 Whatever's been thrown his way this season, Minnesota's designated hitter has rarely been deterred.

Cruz homered and drove in three runs on four hits in his second game back from a wrist injury, yet another powerful performance at the plate by the 39-year-old for the Twins in a 14-4 victory over the Chicago White Sox on Tuesday.

"When most people miss some time, it's difficult to come back and play. Sometimes guys miss two or three days and when they come back, they're off. It seems like he's never really off," said Twins manager Rocco Baldelli, who is nearly 15 months younger than Cruz.

Max Kepler hit a two-run homer to stay one ahead of Cruz for the team lead, starting pitcher Michael Pineda (9-5) stayed strong for seven innings, and the Twins raised their lead on Cleveland in the AL Central race to three games. That's the biggest it's been in two weeks.

Cruz, who gave the Twins a scare by rupturing a tendon in his left wrist during a swing in a game against the Indians on Aug. 8, returned from the minimum stay on the injured list on Monday. He's 6 for 11 with four RBIs after his reinstatement, pushing his age-defiant season totals to 33 home runs and 80 RBIs in just 89 games.

"When I come back, I don't have to, I guess, figure it out. So I make sure I do my work and whatever I need to do to prepare for every game," Cruz said. "That's my routine, so I don't lose the time, I guess. Preparation, you know?"

Cruz, who signed with the Twins for $14 million this year with a club option for 2020 at a market-bargain $12 million, has 15 homers in his last 20 games. He hit a career-high three doubles in this one and became the first Twins player since Michael Cuddyer in 2005 with four extra-base hits in a game.

"It's unbelievable he's gotten to that age and still plays baseball like that," Pineda said. "For me, it's very impressive."

Jose Abreu, whose three-run home run the game before lifted the White Sox to a 6-4 win, took Pineda deep for a two-run shot after Tim Anderson's RBI double for a 3-0 lead in the third. Anderson homered in the sixth inning, too, but the damage against Reynaldo Lopez (7-11) was already done by then.

Cruz tied the game with his home run in the fourth. Then he drilled a two-run double off the wall in right field with the bases loaded in the fifth, and Eddie Rosario followed with a two-run single for a 7-3 lead. Lopez has allowed 27 homers in 26 starts this year, a career high.

"Is it hard? Yeah, because you've got some really good hitters who can do a lot of damage," White Sox manager Rick Renteria said. "But those are some of the things that he's got to continue to understand."

Lopez got the first two outs of that inning on groundballs, too, but Kepler reached on an error when Lopez fielded his checked-swing dribbler in front of the plate and watched Abreu drop his toss to first base. Then he hit Jorge Polanco with a pitch, a drawn-out at-bat extended by a loose squirrel on the field. Lopez was in his windup for an outside fastball when home plate umpire Bill Welke called time.

"It was just a bad break. That took me out of a mindset a little bit, because we had to regroup and rethink about the next pitch," Lopez said through a team interpreter. "Those things happen. I think that's part of the game. If I could take that moment back, the hitter wouldn't have any chance to hit that pitch."

Polanco hit a two-run homer in a seven-run eighth, one of six extra-base hits in the inning alone and 10 in the game for the Twins, who lead the major leagues in home runs and are third in doubles. The Twins have at least one extra-base hit in 80 straight games, their fourth-longest streak in team history.

Pineda threw 70 of 88 pitches for strikes, a season-best percentage (79.5) by a Twins starter. He was also the first Twins starter in 20 games to finish seven innings, since Jose Berrios did so at Miami on July 31.

Abreu has 28 homers and 94 RBIs, zeroing in on becoming the fourth White Sox player with at least four seasons of 30-plus homers and 100-plus RBIs. Frank Thomas had eight, Paul Konerko five and Magglio Ordonez four.

The Twins are 26-5 when Kepler hits a home run. He has hit 31 of his 34 homers from the leadoff spot, the most in the majors.

For the second consecutive night, play was halted for a moment by a squirrel that scampered onto the field. This time, the squirrel ran from right field straight through Kepler's legs while he took a lead at first base and into Chicago's dugout during the fifth inning. The escape route wound through foul territory along the third-base line and eventually through a tiny opening at the base of the wall in left-center. Cruz was at bat on Monday when a squirrel scurried into Minnesota's dugout.

"I like seeing the guys jump around and start worrying about where the squirrel is," Baldelli said.