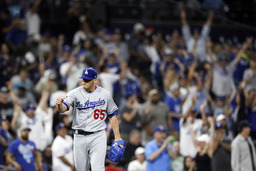 SAN DIEGO (AP) After a wild pitch left Kenley Jansen with his seventh blown save of the season, Kike Hernandez helped pick up the struggling Los Angeles Dodgers closer.

"I just thought our guys kept their composure," manager Dave Roberts said after the Dodgers lowered to nine their magic number for clinching their seventh straight NL West title. They took two of three against San Diego after losing two of three to the New York Yankees at Dodger Stadium last weekend.

Padres All-Star Kirby Yates (0-5) retired Chris Taylor and Corey Seager in the 10th before walking Hernandez, who stole second. Urias made a tough, short-hop pickup of a ball hit sharply by Russell Martin, but then overthrew first base for an error that allowed Hernandez to score. Pinch-hitter Will Smith singled and A.J. Pollock followed with an RBI single.

Hernandez noticed Padres catcher Francisco Mejia hurt his side while on the basepaths in the bottom of the ninth and didn't make a strong throw down to second after Yates' final warmup pitch before starting the 10th.

Hernandez thought he might have come off the bag on his slide into second.

"You can say I came off the base or whatever, but they didn't challenge, so I didn't," he said.

Roberts said Hernandez "had a heck of a ballgame," including an RBI single in the eighth.

"When you get two outs, most guys try to do it with one swing, but Kike took a good at-bat against Yates to get on base," the manager said. "Stealing second base, then Russ had a good at-bat. Fortunately we got a little break by the Urias ball thrown away."

Urias took over at shortstop after rookie phenom Fernando Tatis Jr. was placed on the injured list this month. Tatis is likely done for the season.

"I think just everything happened too fast," Urias said. "Maybe I rushed a little bit and that is why I kind of threw it away. It's part of the game and I hope I can learn from it."

Padres manager Andy Green said Urias had "a very nice catch" but was "probably just a little casual there" with the throw.

The Dodgers "put the ball in play and sometimes things happen," Yates said.

Los Angeles took a 4-3 lead into the ninth and Jansen (4-3) was trying for his 28th save. But he allowed Mejia's leadoff double to left field that fell just in front of a sliding Taylor. Mejia advanced on Urias' flyout to right and scored on Jansen's wild pitch.

Wil Myers walked and stole second before Greg Garcia grounded out to end the inning.

Jansen is "throwing the ball well, he really is," Roberts said. "That play, C.T. gave it everything he had. If he makes the play, then it's a completely different inning. I still think the ball's coming out really well."

Casey Sadler pitched the 10th for his first major league save.

Dodgers starter Kenta Maeda bounced back from an early 2-0 deficit and hit a go-ahead, two-run single in the second.

Maeda walked two of the first three batters he faced before Eric Hosmer hit an RBI single and Hunter Renfroe a sacrifice fly.

The Dodgers went ahead 3-2 in the second against right-hander Trey Wingenter, who was making his first professional start in another bullpen game for the Padres, and Luis Perdomo.

The two relievers walked three batters in the inning, and it cost the Padres. Wingenter allowed two walks, a single and Seager's RBI groundout before he made way for Luis Perdomo. He walked Martin before Maeda singled to right to bring in Taylor and Hernandez.

Wingenter permitted three runs on one hit in 1 1/3 innings. He struck out two and walked two.

Hernandez hit an RBI single in the eighth for a 4-2 lead but was thrown out trying to stretch it into a double.

Hosmer homered for the Padres in the eighth, his 20th, off Pedro Baez.

Dodgers: Second baseman Max Muncy sustained a bruised right wrist when he was hit by a pitch from Matt Strahm in the fifth and came out of the game. Roberts said X-rays were negative.

Padres: Rookie RHP Chris Paddack (7-7, 3.84) starts Thursday night in the opener of a four-game series at San Francisco. The Giants will go with RHP Dereck Rodriguez (5-6, 5.26).