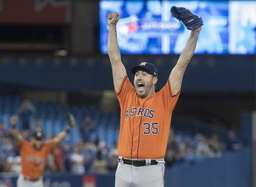 TORONTO (AP) Justin Verlander took the mound for the ninth inning, fully aware of the no-hitters he finished - and his near misses, too.

Zeroed in, he wouldn't be denied this time.

Verlander pitched his third career no-hitter, punctuating a dominant season by striking out 14 to lead the Houston Astros past the Toronto Blue Jays 2-0 on Sunday.

Verlander became just the sixth pitcher to throw at least three no-hitters in the majors, an elite club that includes the likes of Nolan Ryan, Sandy Koufax and Cy Young.

"It means a lot," Verlander said. "I'd be lying if I said I didn't know that. I've come so close. Since I've had two, I think I've blown two in the ninth and another couple in the eighth."

"I was definitely aware of the history aspect of it. Definitely a big hurdle to get over and a very special moment for me," he said.

Verlander (17-5) is the first pitcher to throw two no-hitters as a visitor in the same park - he also threw one at Rogers Centre in 2011 with Detroit. His other no-no was in 2007 for the Tigers against Milwaukee.

"I guess I have to like this mound a lot now," Verlander joked.

Verlander allowed only one runner, with Cavan Biggio drawing a one-out walk in the first inning. The Blue Jays, with a lineup full of young, aggressive batters, never came close to a hit in the Astros' second no-hitter of the season - four Houston pitchers combined to blank Seattle a month ago.

"Some of the guys I've idolized," Verlander said.

And it came after a series of close calls.

Verlander lost a no-hit try in the eighth inning late in 2011, had bids broken in the ninth in 2012 and 2015 and had another attempt spoiled last May in the seventh by Jose Abreu of the White Sox.

Verlander's wife, model Kate Upton, is currently attending the Venice Film Festival, where she tweeted out a message of congratulations.

"She was the first one I called," Verlander said. "She was actually up very late watching the whole thing, so that's awesome."

Verlander threw a season-high 120 pitches, mixing a fastball that reached the upper 90s mph with a sharp curve.

The right-hander retired the last 26 hitters in a row. But he still needed help because the game was scoreless going into the last inning - according to baseball rules, Verlander had to pitch a complete game to get credit for a no-hitter.

That's when Canadian-born rookie Abraham Toro stepped up for the AL West leaders. The Astros newcomer hit a two-out, two-run homer in the ninth inning off Ken Giles (2-3) that cleared the way for Verlander to complete the no-hitter.

"The whole dugout was going crazy because everybody knew what was one the line," Toro said.

Toro made a routine play on Bo Bichette's grounder to third base for the last out. Verlander joked the 22-year-old Toro, playing just his eighth game in the majors, was in for quite a nice reward.

"I could not be happier for that kid," said Verlander, who sought out Toro for an on-field hug after the game. "Just an incredible moment for him, from Canada, able to do that and then get the last out as well. Such a special moment and I'm happy I'm able to celebrate with him."

Said Bichette: "I honestly thought I was going to get him, but then he made a really good pitch."

"He is who is for a reason," Bichette said.

Only one Toronto player hit a ball harder than 100 miles per hour off the bat.

Billy McKinney sent a grounder that first baseman Aledmys Diaz, playing an unfamiliar position in place of the injured Yuli Gurriel, stopped in the fifth. Diaz fed Verlander to end the inning.

"I think every no-hitter needs something to go your way," Verlander said. "That was a pretty poor pitch that was hit pretty hard, fortunately on the ground, and AD over there is a great athlete and was able to knock it down and make a great play."

Just two other pitchers have no-hit the same team more than once. Cleveland's Addie Joss did it to the White Sox in 1908 and 1910, while San Francisco's Tim Lincecum held San Diego hitless in 2013 and 2014.

This was the fourth no-hitter in the majors this year. The last one was by the Astros, a combined effort from Aaron Sanchez, Will Harris, Joe Biagini and Chris Devenski against Seattle on Aug. 3. Sanchez and Biagini did it in their first game since being acquired in a trade with Toronto.

Houston is the first team to pitch two no-hitters in a season since Max Scherzer threw a pair for Washington in 2015.

Oakland's Mike Fiers and a tandem effort by Taylor Cole and Felix Pena of the Angels accounted for this year's other gems.

Verlander is tied for the big league lead in wins. The eight-time All-Star and former AL MVP and Cy Young Award winner tops the majors in strikeouts (257) and innings (193) and leads the AL with a 2.56 ERA.

With the crowd of 24,104 getting to its feet to begin the ninth, Verlander retired Brandon Drury on an easy grounder and struck out Reese McGuire.

After that second out, catcher Robinson Chirinos went to the mound for a quick visit with Verlander. The count went full on Bichette, who fouled off a pitch before hitting a bouncer to Toro.

Verlander took a couple hops toward first as he watched Toro field the ball, saw the throw on target and then began the celebration in the middle of the diamond.

Not bad for an ace who was ejected in his previous start. Verlander was tossed last Tuesday at home shortly after a close pitch didn't go his way against Tampa Bay.

It was Verlander's ninth career shutout and first this season. This was the 13th no-hitter for the Astros, including one by Ryan.

The Blue Jays were no-hit for the sixth time. Before Sunday, the last to do it was Seattle's James Paxton, who became the first Canadian pitcher to throw a big league no-hitter north of the border when he beat the Blue Jays on May 8, 2018.

Astros: Gurriel (left elbow contusion) was scratched from the lineup. He was hit on the elbow by a pitch Saturday. ... RHP Josh James (right shoulder) was activated off the injured list.

Blue Jays: Reinstated RHP Ryan Tepera (right elbow) from the 60-day injured list. To make room on the 40-man roster, RHP Neil Ramirez was designated for assignment. ... OF Lourdes Gurriel Jr. (strained left quadriceps) took batting practice on the field before the game and could be activated off the injured list Thursday. ... OF Derek Fisher (sprained right ankle) was scratched from the lineup and replaced by Drury. Fisher ran into the wall while fielding a double Saturday. ... LHP Clayton Richard (strained left lat) allowed three runs and four hits in two innings in his first rehab start at Triple-A Buffalo Saturday. He struck out one and walked one.