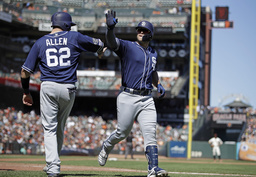 SAN FRANCISCO (AP) Pablo Sandoval gave fans at Oracle Park plenty of reason to cheer during 10 seasons over two stints with the Giants.

On Sunday in what could be his final game in San Francisco, a crowd of nearly 39,000 rose to honor Sandoval once again.

It didn't take a storybook home run. Not even a base hit. Just a routine pinch-hit groundout that had fans cheering wildly and snapping pictures of the two-time All-Star.

"Just one of those moments you don't want to forget," Sandoval said after the Giants' 8-4 loss to the San Diego Padres. "I didn't get the result I wanted but I got the best result, the love from the fans."

It was a highly emotional day from the start for Sandoval.

The 33-year-old former World Series MVP was activated off the injured list earlier in the day for a final at-bat under retiring manager Bruce Bochy.

The popular "Kung Fu Panda" drew a loud, lengthy cheer when he went to the on-deck circle in the seventh inning.

The crowd rose for a standing ovation and fans held phones to take pictures and video the moment when Sandoval walked to the plate following Brandon Crawford's single.

"At least I hit the ball. I didn't strike out," a grinning Sandoval said.

Bochy greeted Sandoval as he came back to the dugout.

"I said, `It's been a joy,'" Bochy said. "Obviously we were hoping to get a base hit there, but I think he saw how much he's loved here with the crowd. What a great ovation they gave him."

"He deserved that and a lot more," Samardzija said. "Everything he's done for this organization is unbelievable, just how clutch he's been. Pablo's a top-notch guy and a great teammate."

Eric Hosmer doubled, singled and tripled in his first three at-bats for San Diego. With a chance at the cycle, he walked in the seventh inning and struck out in the ninth.

Eric Lauer (8-8) beat the Giants for the third time this season. He struck out nine and allowed four runs in six innings.

Garcia homered off Samardzija (9-11) to start the game. France hit a solo shot against Samardzija in the second and added a three-run drive off Fernando Abad in the sixth. The Padres have hit 104 home runs on the road, tying the franchise record set in 1970.

Lauer bounced back after giving up two runs in the first inning. The Padres lefty retired 14 of 16 during one stretch and fanned the final two batters he faced in the sixth.

"He's finding a switch in the middle of his outings that takes him from solid to borderline spectacular," San Diego manager Andy Green said. "We've got to find that switch in the first because not every game can you spot a team two runs before you start getting it with your best stuff. Overall it was a good outing for him."

Samardzija owned a 1.84 ERA through five August starts but couldn't carry the momentum over. He allowed six runs on nine hits in 5 2/3 innings.

In the middle of the second inning the Giants unveiled a picture of Bochy on the left field wall, along with the words `Thank You Boch!' printed next to it. Video tributes came from former Padres players and general manager Randy Smith. Bochy managed San Diego from 1995-2006.

Giants: Johnny Cueto pitched six scoreless innings in a rehab start with Sacramento on Saturday. Cueto is expected to come off the injured list in the next few days. "He's ready to go," Bochy said. "It's just a matter of where we pencil him in." ... Reyes Moronta was diagnosed with a torn labrum and is facing possible surgery. Moronta left Saturday night's game with what the team initially termed an acute right shoulder strain.