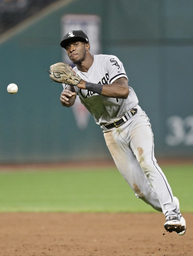 CLEVELAND (AP) Cleveland manager Terry Francona said the Indians' game against Chicago was painful to watch, but the outcome was worth it.

Carlos Santana homered, Franmil Reyes had a three-run double and Cleveland overcome eight walks and two errors in an 11-3 win over the White Sox on Sunday.

"I've got a dentist appointment in the morning, I feel like I've already been there," Francona joked after the 4-hour, 7-minute marathon in which the teams combined to throw 383 pitches.

"We were a little free and loose with the ball and we had too many walks, but we won the game," Francona said. "You don't want to ever let that get lost. But we did some things that aren't gonna put our best foot forward in some close games like that."

Santana, a first-time All-Star this season, hit his team-leading 32nd home run with one out in the sixth and had an RBI single in the seventh.

The longest nine-inning game in Progressive Field history was 4 hours, 19 minutes on April 28, 2009, against Boston.

The Indians needed a boost after being swept in a three-game series at Tampa Bay. Cleveland trails Minnesota by 5 1/2 games in the AL Central and is a half-game behind the Rays in the race for the first wild-card spot.

The White Sox have dropped seven straight - matching their longest streak of the season - and are a season-high 17 games under .500.

"Today was just a tough one coming off a really tough seven days," manager Rick Renteria said. "We've got to shake it off and put it behind us."

Renteria was ejected by plate umpire Mark Carlson in the fifth inning. It's the eighth time he's been kicked out of a game this season. Renteria thought catcher Welington Castillo caught Francisco Lindor's foul tip that would have resulted in a strikeout.

"I let him know I wasn't happy," Renteria said. "When I went back and watched the video, the ball did bounce."

The White Sox loaded the bases with one out in the seventh, but Adam Cimber retired Eloy Jimenez on a double-play ground ball. Santana fielded the ball, threw to Francisco Lindor at second base and the play ended with Cimber catching the return throw to first.

"I sort of blacked out," Cimber said. "I hoped my foot was on the base when I caught it, and it was."

Jake Bauers, called up from Triple-A Columbus on Saturday, hit a two-run pinch-hit homer in the fourth.

Jose Abreu's groundout pushed a run across in the third for Chicago, but Oscar Mercado threw out Yoan Moncada at the plate from center field to end the inning. Moncada tried to score from second on Jimenez's single.

Yolmer Sanchez had an RBI double in the fourth and Moncada had a sacrifice fly in the fifth.

Indians catcher Roberto Perez left the game in the sixth inning after fouling a ball off his left foot. Second baseman Jason Kipnis was out of the lineup for the second straight day and has been diagnosed with tendinitis in his right wrist.

Indians: Jordan Luplow (strained right hamstring) was activated from the 10-day injured list and batted fifth. ... OF Tyler Naquin, who tore the ACL in his right knee Friday, watched the game from a suite and received an ovation when he was shown on the scoreboard.

Yasiel Puig and Bauers uncorked wild throws in the fifth inning. Puig missed a diving catch of Tim Anderson's line drive. Anderson had a double and took third when Puig's throw to the infield got away for an error. Bauers' throw home on Moncada's sacrifice fly sailed to the screen behind home plate.