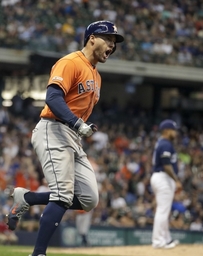 MILWAUKEE (AP) George Springer was just trying to get a hit in the 10th inning to start a rally. He did a lot more than that.

Springer homered to start the inning and lifted the Houston Astros to a 3-2 win over the Milwaukee Brewers on Monday.

"I'm just trying to get on base," Springer said. "Leading off the inning, hopefully I can get to first base somehow and let the other guys do the work, but I was able to hit one hard."

Springer's 30th homer came off reliever Junior Guerra (8-5) and put the Astros ahead.

Milwaukee had a chance to tie it in the bottom of the inning, but reliever Josh James struck out Christian Yelich looking and Hernan Perez swinging to end the game with runners on first and second for his first save.

The strikeout call on Yelich by umpire Ben May upset manager Craig Counsell.

"It's two awful calls," Counsell said, as Yelich had also been called out on strikes in the sixth inning. "I don't know what to say. It's the magnitude of the spot, it's the hitter. It's just bad calls, it's bad umpiring. When it's Christian Yelich and the game's on the line and you miss calls, it hurts and it dramatically affects the outcome of the game."

Yelich had tied the game in the ninth hitting a solo homer off reliever Roberto Osuna (4-3). He was more diplomatic after the game about the strikeouts

"You guys saw it, so I'll let you guys all make your own judgments. I don't want to say anything that's going to get myself fined," he said.

Houston has won 12 of its last 15 games. Milwaukee trails four teams for one of the two NL wild card slots.

Cole's 14 strikeouts, recorded in just six innings, matched his season high for the third time this season. He had won 11 straight starts.

Cole's outing came one day after teammate Justin Verlander threw a no-hitter against the Blue Jays.

Cole gave up a solo home run to Yasmani Grandal on his seventh pitch of the game, a 97 mph fastball. Grandal's opposite-field shot to left, his 22nd homer of the season, gave the Brewers a 1-0 lead in the first inning.

But the 105-pitch outing by Cole, who also recorded double-digit strikeouts in each of his last three starts, was dazzling. The major-league leader in strikeouts (266) walked two and gave up three hits, including a bunt single and an infield single.

Besides Grandal's homer, only one ball struck by Brewers batters left the infield. Cole struck out four Milwaukee batters two times each, including Yelich.

Yordan Alvarez also homered for Houston, moments after hitting a line-drive foul ball that made his teammates scatter in the dugout. It was his 22nd home run of the year, tying the franchise rookie record set by Carlos Correa in 2015.

The homer was off of Milwaukee left-hander Brent Suter, who was making his first appearance since having Tommy John surgery on July 31, 2018.

Milwaukee starter Adrian Houser gave up just one earned run for the fifth straight start. He was lifted after his 98th pitch with the game tied at 1 in the fifth inning.

Astros: 1B Yuli Gurriel (left elbow contusion) returned to the starting lineup. He was scratched from the lineup Sunday after being hit on the elbow by a pitch Saturday.