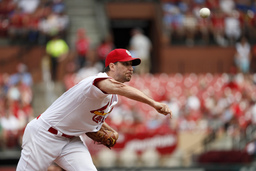 The St. Louis right-hander studied a few of his past performances in an effort to regain some of the aggression from earlier in his career.

It worked perfectly for the 38-year-old veteran.

Wainwright tossed seven scoreless innings and Kolten Wong delivered a run-scoring triple to lead the Cardinals to a 3-1 win over the San Francisco Giants on Monday.

Paul DeJong had an RBI single for the Cardinals, who have won 10 of 12. They remain three games ahead of the Chicago Cubs in the NL Central with 25 games remaining.

Wainwright (10-9) allowed four hits. He struck out one and did not walk a batter in a 96-pitch stint. Wainwright lowered his home ERA to 2.43 in 13 starts this season.

He credited the extra video work for his strong outing,

Suitably inspired, he went out and recorded his third scoreless start of the year - all of seven innings or more.

"He was a pitch-maker today," St. Louis manager Mike Shildt said. "He's always got the gas pedal down. He's got a ferocious mindset."

Wainwright now has 10 seasons of 10 wins or more.

"That's the (Wainwright) of old that we've come to know," Wong said. "A legacy that continues to go on."

"He was good at what he does," San Francisco manager Bruce Bochy said. "He slows you down, he speeds you up - a lot of different looks."

Carlos Martinez recorded four outs to pick up his 17th save in 20 chances. He leads the NL with 14 saves since the All-Star break.

St. Louis scored twice in the first off Tyler Beede (3-9), who gave up three runs on five hits over four innings. He struck out two and walked one.

Dexter Fowler led off with a single and scored on Wong's triple down the right field-line. Paul Goldschmidt brought in Wong with a groundout.

DeJong pushed the lead to a 3-0 with his 200th career RBI in the third.

The Cardinals, thanks to back-to-back doubleheaders on Saturday and Sunday, played five games in a span of 51 hours, 44 minutes and came away with a 4-1 record.

Shildt was impressed with his team's performance during the high-volume stretch.

"You saw zero decline in effort mentally and physically," Shildt said. "Guys were grinding every single pitch, all five games and they were rewarded for it."

Giants: RHP Johnny Cueto will throw a side session sometime this week and could be back in the rotation this weekend, Bochy said. Cueto has missed the entire season while recovering from Tommy John surgery. He has made six rehab starts with Triple-A Sacramento. "He feels good, he's ready to go," Bochy said.

Cardinals: C Matt Wieters received a cortisone shot for a mild calf strain. There is no timetable for his return. "He's in a very optimistic place," Shildt said.

San Francisco RHP Dereck Rodriguez (5-7, 5.49) will face RHP Jack Flaherty (8-8, 3.71) in the second game of the four-game series on Tuesday. The Giants are 5-8 in games Rodriguez has started this season. Flaherty had a career-best four-game winning streak stopped in a 4-1 loss to Milwaukee on Wednesday.