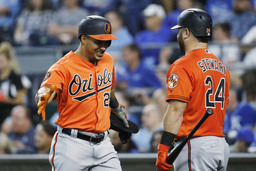 ST. PETERSBURG, Fla. (AP) It took some big ninth-inning hits for the Tampa Bay Rays to put together a five-game win streak that pushed them to the top of the AL wild-card chase.

They could have used another one Tuesday in a 4-2 loss to the Baltimore Orioles in the first game of a doubleheader.

The Rays only got five hits in the game and were shut out over four innings by the struggling Orioles bullpen.

Rio Ruiz and Anthony Santander homered and Mark Trumbo drove in a run with a pinch-hit double for the Orioles, who came back from a 2-0 deficit to end the Rays' streak.

Tampa Bay began the day with a slight edge over Cleveland for the top AL wild-card spot.

The afternoon game, originally scheduled for Wednesday night, was rescheduled on Aug. 31 as a precaution for Hurricane Dorian, which was then approaching Florida but never reached the Tampa Bay area.

A day after his season debut following knee surgery, Trumbo drove in Mason Williams in the ninth inning. Trumbo led the majors with 47 home runs in 2016.

Williams went 2 for 4 and played in his first game with the Orioles.

Ty Blach (1-2) got the win after going five innings in his fourth start for Baltimore. The left-hander took some satisfaction from his first Orioles victory coming in a spoiler situation.

"For sure, especially with the season that we've had," Blach said. "It's been one of those years. But it's awesome to have everybody here in September and everybody pulling for each other. Really nice team win."

Richard Bleier pitched the ninth for his third save in four opportunities. Shawn Alexander, Mychal Givens and Bleier combined for five strikeouts, no walks and three scattered singles in four innings.

"That's big," Baltimore manager Brandon Hyde said. "The last few games we've had a tough time putting up zeroes out of the `pen in big spots."

Ruiz's ninth home run came in the fifth off Rays starter Trevor Richards, driving in Baltimore's first two runs and tying it at 2.

Richards gave up two runs in five hits in five innings, striking out four in his third start for the Rays since his trade from Miami on July 31.

Blach, one of six Orioles called up from Triple-A Norfolk on Tuesday, gave up two hits and four walks while striking out two.

Travis d'Arnaud's 16th home run accounted for the two runs off Blach after Tommy Pham's leadoff single in the fourth.

Rays: Injured starters Tyler Glasnow (right forearm strain) and LHP Blake Snell (left elbow bone chip surgery) are making progress in their rehab programs. Glasnow may be back and able to throw a few innings this weekend, while Snell could have a batting practice session or start a minor league rehab game Saturday. ... Two-way player Brendan McKay was recalled from Triple-A to pitch Friday, but has been shut down from hitting after being out 10 days last month due to left shoulder fatigue.

RHP Andrew Kittredge (1-0) will pitch for the Rays against RHP Gabriel Ynoa (1-7) in the second half of Tuesday's doubleheader, the final game of the 19-game season series. On Thursday, the Orioles open a seven-game homestand against Texas, and the Rays open a four-game home series against Toronto.