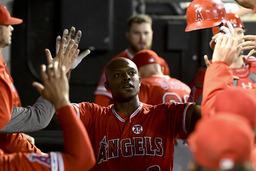 CHICAGO (AP) Brian Goodwin left his mark on a game, just as Mike Trout has done so often for the Los Angeles Angels.

Goodwin's two-run homer in the eighth inning tied the game, and Justin Upton hit a solo shot in the ninth that proved to be the winner as the Angels rallied to beat the Chicago White Sox 5-4 on Friday night, snapping a four-game losing streak.

Chicago led 4-2 with one out in the top of the eighth before reliever Aaron Bummer walked pinch-hitter Taylor Ward. Goodwin followed with a two-run homer that ruined a quality start by White Sox pitcher Lucas Giolito.

Goodwin had replaced Trout in the fifth inning. Trout left the game with right toe discomfort.

"It's not easy. You know what you miss whenever Mike is not in the lineup," Goodwin said. "It brings everything to the table. It's not really for me to fill his shoes, but it's just go out and do what I'm supposed to do, play my game, produce.

"I've been in pretty much a similar situation all year, so I can't say I haven't had a lot opportunities to prepare for it. Whenever the chance presents itself, then just got to take advantage."

Goodwin has been reliable for the Angels all season.

"He's come up huge for us a number of times," Angels manager Brad Ausmus said. "He's done an outstanding job for us. This is a guy we picked up two days before the season started and he's become an intricate part of our team both offensively and defensively."

Despite the injury, Trout was able to appreciate the late-inning heroics.

On the first pitch in the ninth inning, Upton hit his 12th homer of the season, off closer Alex Colome (4-3), to give the Angels the lead.

Angels reliever Hansel Robles pitched a perfect final two innings for the win and improved to 5-0.

Luis Rengifo led off the third with his seventh homer of the season for the Angels, who bounced back after blowing a five-run lead in the seventh inning against Oakland on Thursday night.

The White Sox have lost nine of 11.

Tim Anderson, who was 2 for 4, is bidding to become the first White Sox player to win the AL batting title since Frank Thomas in 1997. Anderson entered the game with a one-point lead over DJ LeMahieu. Anderson moved increased his average to .333. LeMahieu was hitless in three at-bats, dropping his average to .329.

"It would be a huge accomplishment. I mean, we made it this far, so why not give it a shot? I just got to keep being consistent and having fun with it and let the rest take care of itself," Anderson said.

Giolito allowed two runs on three hits in seven innings, but didn't figure in the decision. He struck out six and walked one. Giolito has 216 strikeouts this, the third-most in a season for the White Sox behind Chris Sale and Ed Walsh.

"I'm happy about tonight because I didn't feel my best. I felt out of sync, but I was able to kind of battle and grind through it and make the adjustments to turn it into a quality start," Giolito said.

After Peters allowed a leadoff walk to Adam Engel in the fifth, Anderson extended Chicago's lead to 4-1 with his 16th home run of the season. Anderson watched from just outside the batter's box as the ball flew over the left-field fence.

Shohei Ohtani tripled and scored in the seventh inning.

The White Sox played without manager Rick Renteria, who had surgery Friday to repair the rotator cuff in his right shoulder. Bench coach Joe McEwing managed in Renteria's absence. Renteria is expected to miss the series and return Tuesday, when the White Sox host the Royals for a three-game set.

"He's doing well, he's doing really well. Everything went according to plan. He's recovering now. Our thoughts and prayers were there. Making sure everything went well. They took good care of him. He's coming out of it now and resting well," McEwing said before the game.

Trout is listed as day-to-day. "I've been dealing with it for a little bit now. I've been trying to play through it, just really sore," Trout said. "I was grinding through it in the third and fourth inning and it just got to the point where it affected how I was running." Trout said he will try to play on Saturday.

Angels: Ohtani (Tommy John surgery) will not throw this week as had been scheduled. He remains available as a hitter. He has not pitched this season. ... INF Tommy La Stella (broken right tibia) took part in live batting practice in Anaheim on Thursday. He could return to the active roster next week. ... 1B Albert Pujols was out of the starting lineup on Friday because of an illness. "He came out of the game sick (at Oakland on Thursday night). He was still sick during the night. We can use him to pinch-hit, but we don't want him standing out there the whole game," Angels manager Brad Ausmus said.

White Sox: INF/OF Luery Garcia will miss the entire series against the Angels as he mourns the death of his grandmother. Garcia returned to his native Santiago, in the Dominican Republic, in the wake of his grandmother's death.

Angels: LHP Andrew Heaney (3-4) is the scheduled starter for the Angels on Saturday. In four career starts against the White Sox, Heaney is 2-0 with a 2.10 ERA.

White Sox: RHP Dylan Covey, who was recalled from Triple-A Charlotte on Tuesday, is scheduled to start Saturday. Covey is 1-6 with a 7.17 in 10 starts for the White Sox.