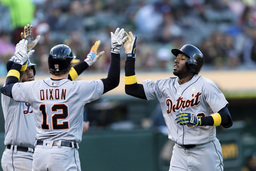 OAKLAND, Calif. (AP) What a week for Chris Bassitt.

Two days after the birth of his first child, the Oakland right-hander shook off a rusty start and set a career-high for strikeouts. Bassitt also played a key role in a rare 6-1-4 double play that helped get the Athletics rolling.

Another big day from Oakland's offense helped, too.

Bassitt struck out 11 in six innings for his 10th win, helping the A's beat the Detroit Tigers 10-2 on Saturday night.

"A lot of times he gets better as he goes along," manager Bob Melvin said. "He has the ability to be a little bit effecitively wild where one's up and in and then ones down and away and then one's paint. All that kind of works for him. When he's not giving free passes it makes it a lot easier on him."

Matt Chapman hit his 32nd home run, Matt Olson had four hits including his 29th homer, and Jurickson Profar hit his 20th for Oakland, which remained one game behind Tampa Bay for the top AL wild card. The A's moved 1 1/2 games ahead of Cleveland for the second spot.

Pitching on eight days rest, Bassitt (10-5) allowed two runs and eight hits and didn't walk a batter for the fifth time this season. He was pitching two days after the birth of his daughter. The 11 strikeouts are the most by an A's pitcher this season.

"Pretty much didn't sleep for three days," Bassitt said. "Then I got here and was a zombie for a day. Yesterday felt pretty good and today I felt pretty good. The first two innings were just awful. My off speed was not there. I basically told (catcher Sean Murphy), `Just stay with me, I'll get through it."

Christin Stewart hit a high pop-up into foul territory that A's third baseman Matt Chapman chased before the ball came back fair and dropped on the infield dirt. Shortstop Marcus Semien grabbed the ball and threw to Bassitt who alertly covered third for the force out. The pitcher then threw to second to get Miguel Cabrera, who had stopped running while the ball was in the air.

"I didn't know where the ball was going," Bassitt said. "The wind was weird tonight. I don't know in the history of baseball (that's) ever been done."

Harold Castro matched his career high with four hits and had two RBIs for Detroit. The Tigers struck out 19 times.

"We were really swinging wildly tonight," Detroit manager Ron Gardenhire said. "We miss a few plays and these guys absolutely kill you."

One day after blowing a four-run lead in a 5-4 loss that snapped a 16-game winning streak against the Tigers, the A's fell behind 2-0 then rallied against Jordan Zimmermann (1-10).

Profar homered off Zimmermann in the second, becoming the sixth A's player this season with at least 20 home runs - a franchise record.

Olson singled leading off the fourth to spark a four-run inning then hit a solo home run to right off Zimmermann in the fifth. Oakland's Gold Glove first baseman added a two-run single off Matt Hall in the sixth to make it 9-2.

Chapman homered in the eighth.

Bassitt became the third A's pitcher to win 10 or more games this season, joining Mike Fiers (14) and Brett Anderson (11). It's the first time since 2013 that Oakland has had three 10-game winners. Homer Bailey has 12 wins but only five have come since he was traded from Kansas City to the A's.

Athetics: One day after coming off the injured list, Ramon Laureano was forced out of the game with a right leg cramp after doubling leading off the sixth. Laureano missed more than a month with a right lower leg stress reaction. . Yusmeiro Petit has rejoined the team after missing the past few days following the death of his father. A moment of silence was held in honor of Petit's father before the game.

Oakland's Sean Manaea (0-0, 0.00 ERA) makes his second start of the season against Detroit's Daniel Norris (3-11, 4.76) on Sunday in a matchup of lefties. Manaea missed the first five months of the season recovering from shoulder surgery, then threw five scoreless innings against the Yankees in his 2019 debut. Norris lost to the A's in May and is winless in two career starts against Oakland.