Beede, Giants shut down Dodgers in a 1-0 victory 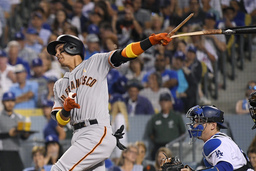 LOS ANGELES (AP) San Francisco Giants rookie right-hander Tyler Beede removed any doubt on whether he had rediscovered his form.

Beede induced MVP candidate Cody Bellinger into a lazy fly ball with the bases loaded in the fifth inning to complete his scoreless outing as the Giants beat the Los Angeles Dodgers 1-0 on Saturday night.

The last two months have not been easy. Beede entered 0-6 over his last eight starts with a 7.05 ERA. The Giants lost all eight of those games. On Saturday, his five scoreless innings came with three strikeouts, as the Dodgers had four hits against him and worked three walks.

The high-scoring Dodgers offense is closing in on yet another National League West title, but against the Giants they were shut out for just the second time at home this season and the fifth time overall. They had not been held scoreless since May 19 at Cincinnati.

"I loved the challenge," Beede said of the facing a top hitter with the bases loaded. "Obviously it was sort of self-induced; my own traffic out there with a couple of free passes. It's a big at-bat but I tried to not make too big of pitches. I fell behind 2-0 and made two quality pitches with my fastball and was able to get out of it."

Six Giants relievers held the Dodgers hitless over the final four innings as manager Bruce Bochy pulled all the correct levers in his next-to-last game at Dodger Stadium as a manager. Right-hander Jandel Gustave pitched the ninth for his first career save.

The difference ended up being Kevin Pillar's RBI ground out in the first inning.

It was the 107th career victory at Dodger Stadium for Bochy, who will retire at the end of the season. No visiting manager has more victories in the Dodgers' home park, where Bochy will guide a team for the last time Sunday.

He not only let Beede (4-9) finish on a positive note, he mixed and matched his pitchers all the way to the finish to make sure the right-hander picked up his first victory since July 14.

"Sometimes it can be a game to get you over the hump to keep going out there to figure it out," Bochy said of Beede. "His curveball got better as he went and he got a couple of chases on it. His stuff was really good, 95 (mph) with a good slider. That's a tough lineup to navigate through, but he just looked very determined."

The Dodgers entered the three-game series against their rivals with a magic number of four to clinch their seventh consecutive National League West title. While already eliminated from playoff contention, the Giants made sure a Dodgers party will not happen this weekend.

The earliest the Dodgers can now clinch is Tuesday, at the start of an interleague series at Baltimore.

The Giants loaded the bases in the first inning against Dodgers rookie starter Tony Gonsolin. Pillar's slow roller to Justin Turner at third base was able to bring home Mike Yastrzemski with what proved to be the game's only run.

Gonsolin (2-2) recovered from his shaky start to allow one run on two hits over four innings. He did give up four walks, while recording five strikeouts.

"I grinded through the first inning and I think it is another example of execution," Gonsolin said. "I think I can execute a lot better and I made the adjustment after that."

Gonsolin is a long shot to earn a role as the fourth starter in the playoffs, as Julio Urias and Rich Hill are also vying for the role. A relief role could be an option, but a first inning in which he gave up two hits and two walks is not the kind of entrance the Dodgers are seeking.

"I think it's recognizing that the adjustment needs to be made sooner," Gonsolin said. "After that first one, the long inning, I got to relax after that but I have to be able to make that adjustment sooner."

The Dodgers had their chances, but also left the bases loaded in the second inning, as well as the fifth, against Beede. Gonsolin struck out with the bases full to end the second, before Bellinger's fly ball to left field in the fifth.

The Dodgers appeared to miss the run-producing bat of Max Muncy, who hasn't played since Aug. 28 because of a small fracture in his right wrist. He isn't expected back until next weekend at New York against the Mets.

"We certainly miss the at-bats he gives you every time he steps in the box," manager Dave Roberts said. "But even tonight there were some good at-bats and Beede made some pitches. . There were some things that didn't go well but we squared some balls up."

In a season in which plenty has gone against San Francisco, aside from a midseason surge, the Giants are 7-8 against a Dodgers team that has the best record in the National League at 92-52 and is within reach of the best record in baseball behind the New York Yankees and Houston Astros.

The Giants are seeing some of their young players deliver in the rivalry series in front of sold-out crowds of at least 53,000 fans.

Not only did Beede appear to get back on track, Mauricio Dubon has gone 4 for 7 in the series with a double, home run and three RBIs, while stealing his first career base Saturday. Gustave not only recorded his first save while facing three batters in the ninth, he has a 1.86 ERA in 19 games this season.

Giants: OF Alex Dickerson was sent back to San Francisco to receive a cortisone injection for a sore right oblique. Manager Bruce Bochy says it is possible Dickerson could return before the end of the season. ... INF Zach Green was recalled from Triple-A Sacramento and placed on the 60-day injured list with a left hip impingement, opening a spot on the 40-man roster that allowed the Giants to claim LHP Wandy Peralta off waivers from the Reds.

Dodgers: After he reported a clean bill of health following a two-inning simulated game Friday, the Dodgers confirmed that LHP Rich Hill will indeed come off the injured list Thursday and make a short start at Baltimore. Hill has been on the IL since June with a left forearm flexor strain. ... OF Alex Verdugo will not join the team on its upcoming road trip after a setback in his return from an oblique injury with manager Dave Roberts still expecting his return at some point. ... 3B Max Muncy, on the IL with a small fracture in his right wrist, is being targeted for a return Friday at New York against the Mets, Roberts said.

Giants: RHP Dereck Rodriguez is likely to rely heavily on off-speed pitches in Sunday's series finale after using the strategy to hold the Cardinals to one run over seven innings Tuesday.

Dodgers: Julio Urias (4-3, 2.55) will be limited to three innings and/or 45 pitches in his second start since returning from a 20-game suspension under MLB's domestic violence policy.