Indians hold off Angels 4-3 for sweep; Carrasco gets win 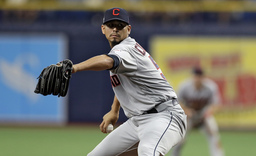 ANAHEIM, Calif. (AP) Cleveland Indians manager Terry Francona had the perfect description for Wednesday night's 4-3 victory over the Los Angeles Angels when he said "we pieced it together."

Carlos Santana and Francisco Lindor homered while Carlos Carrasco won in relief as six Cleveland relievers allowed only one run over the final 4 2/3 innings.

"There was a lot going on but we did a real good job," Francona said.

The Indians went 5-1 on their road trip against Minnesota and Los Angeles and are half-game behind Oakland for the second AL wild-card spot. They trail wild-card leader Tampa Bay by one game.

Cleveland is within four games of Minnesota in the AL Central heading into a three-game series at home against the Twins this weekend.

"We have to play hard in that series like we did in this road trip and go from there," Carrasco said.

Carrasco (5-7), making his fifth appearance since being treated for leukemia, pitched 1 2/3 scoreless innings with two walks and two strikeouts. The right-hander threw 30 pitches, the most during his comeback.

Carrasco said coming in during the fifth with a three-run lead was a good situation for him and that a scoreless outing is a step in the right direction.

"That was a big step for him. He's going to play a big role in what we are doing," Francona said. "To have him do it here. It started with a walk but then he was terrific"

With All-Star closer Brad Hand back in Cleveland for an MRI on his left arm, Francona used three pitchers to get through the ninth inning. Nick Wittgren, Oliver Perez and Adam Cimber each got one out. Cimber struck out Albert Pujols with a runner on first for his first major league save.

The Indians wanted Hand checked because his velocity had been decreasing the past couple outings. Francona said the MRI was clean.

"When you start having an MRI on someone who has thrown as much as he has and it comes back that clean it makes you feel good," Francona said.

Santana opened the scoring when he homered in the first off Dillon Peters (3-3) for his 34th of the season, which ties his career high from 2016. Lindor homered for the second straight night and for the fifth time this month.

"It looked like he was kind of off from the get go. Not only the pitching, but the balks. Just looked like something was off," Angels manager Brad Ausmus said of Peters, who allowed four runs on five hits in three innings.

Down 4-0, the Angels rallied. Shohei Ohtani snapped a 0-for-11 skid in the fifth when he lined Adam Plutko's slider over the wall in right center for his 18th homer of the season. Kole Calhoun hit a solo homer in the eighth off Tyler Clippard.

Plutko - who helped lead UCLA to the College World Series title in 2013 - started for Cleveland and yielded two runs on six hits over 4 1/3 innings. The right-hander struck out three and walked two.

Manager Brad Ausmus said he held Trout out for the fourth straight game to give the outfielder's right foot even more time to heal. The Angels are off on Thursday and could have their superstar back Friday for the start of a three-game series against Tampa Bay.

Trout had a cryoablation procedure last weekend to deaden the tissue around the irritated nerve in the foot.

The Indians went unbeaten against the Angels for the second time in three years and have won 24 of the past 28 in the series.

Angels: OF Justin Upton had an MRI after complaining of right knee discomfort and was held out of the lineup. He is 2 of 14 over the past four games. ... P Cam Bedrosian is being shut down for the rest of the season due to a right forearm strain.

Indians: Are off Thursday before RHP Aaron Civale (3-3, 1.93 ERA) takes the mound in Friday's opener against the Twins.

Angels: LHP Andrew Heaney (4-4, 4.30 ERA) gets the call Friday for the first of three games against the Rays.