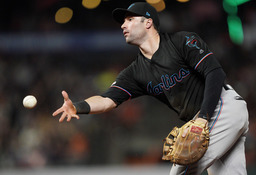 Tyler Beede allowed three hits in 6 1/3 innings, Buster Posey drove in the game's only run, and the Giants beat the Miami Marlins 1-0 on Friday night.

Beede (5-9) struck out five and walked one. Brandon Belt had three hits, including two doubles for the Giants, who lead the majors with five 1-0 wins.

Tyler Rogers and Shawn Anderson combined for 2 2/3 innings to complete the four-hitter. Anderson pitched around Curtis Granderson's pinch-hit single leading off the ninth to convert his second save.

All three pitchers are rookies.

"That's a close ballgame, a one-run ballgame, and it didn't faze them at all."

Beede was coming off a strong outing, the right-hander pitched five shutout innings against the first-place Los Angeles Dodgers on Sept. 7. His 12 1/3 scoreless innings streak going back to Sept. 2 is a career-high.

The Marlins got another solid start from Sandy Alcantara (5-13), who struck out six, walked none and gave up nine hits and one run in seven innings.

"I thought it was one of his better ones just from the standpoint that he didn't have his really good stuff tonight," Marlins manager Don Mattingly said. "He was up in the zone a little bit more than usual. But I'm seeing results. That's good to see when he's out there without quite his stuff."

Miami, which experienced its 22nd shutout, has lost five straight and seven of eight and is 10-33 since July 30.

In the sixth, Posey punched a single through the hole on the left side of a drawn-in infield, scoring Stephen Vogt from third with one out. Vogt doubled leading off the inning and went to third on Kevin Pillar's grounder to first.

Vogt, a catcher by trade playing left field for San Francisco, made a nice running catch in the gap on Miguel Rojas' line drive leading off the fourth.

Posey was batting sixth for the first time this season.

Alcantara hadn't allowed a run for 14 straight innings before the Giants broke through. The right-hander threw a shutout against Kansas City in his most recent start on Sunday.

The Marlins failed to get a runner into scoring position.

Their best chance was in the seventh, when Magneuris Sierra singled leading off the inning, but he was thrown out trying to steal second. Sierra was originally ruled safe, but the call was overturned on a replay challenge.

Next week's series at Boston has generated some buzz, with outfielder Mike Yastrzemski returning to the city where his Hall of Fame grandfather Carl Yastrzemski remains a legend.

"I've thought about it, only because I've had a lot of calls about it," Giants manager Bruce Bochy said, acknowledging that he's frequently been asked, "Am I going to put him in left?" where Yastrzemski's grandfather played.

"That's a pretty cool I'm sure for him and his granddad," Bochy said. "It's gonna be fun for the fans. It's a big name there, so it's going to be exciting."

Marlins: OF Garrett Cooper left the game after making a sliding catch of Yastrzemski's flyball in the bottom of the first. He's day-to-day with a left knee contusion.

Giants: LHP Will Smith (back tightness) was expected to throw on flat ground Friday. The All-Star closer probably won't pitch until Tuesday, when San Francisco opens the series at Boston, Bochy said. ... OF Alex Dickerson (right oblique strain) was scheduled to hit curveballs in the cage off a machine after taking batting practice Friday and will run bases on Saturday. He could be ready for the Boston series, Bochy said. ... Jalen Davis (left wrist contusion) is day-to-day;

Marlins: RHP Robert Dugger (0-2, 2.49 ERA) will make his fifth career start, seeking his first win despite several strong outings. The 23-year-old has a 2.25 ERA over his last three starts.